Worshippers at a Trinity College at Cambridge sermon were 'in tears' and one shouted that this was 'heresy' after the dean backed a student’s claim Chirst had a 'trans body.'

A member of the congregation wrote that 'I am contemptuous of the idea that by cutting a hole in a man, through which he can be penetrated, he can become a woman.'

Worshippers at a Trinity College at Cambridge sermon were “in tears” and one shouted that this was “heresy” after the dean backed a student’s claim that Christ had a “trans body,” as reported by the Telegraph.

The sermon was offered by Joshua Heath, who is working on a PhD in theology.

Heath reportedly said that Christ takes on a transgender body in historical artwork, appearing both masculine and feminine in different paintings.

The sermon displayed Jean Malouel’s painting called the Pieta, in which Christ is pictured dead with blood running down His side. Heath noted that the blood coming down from the side wound of Christ to the groin in the painting “takes on a decidedly vaginal appearance.”

“[I]f the body of Christ as these works suggest the body of all bodies, then his body is also the trans body,” Heath concluded.

Michael Banner has been the “Dean, Fellow and Director of Studies in Theology and Religious Studies at Trinity College since 2006,” according to the college website, said Heath's claims were legitimate.

In a letter to Banner, a member of the congregation wrote that “I am contemptuous of the idea that by cutting a hole in a man, through which he can be penetrated, he can become a woman.”

“I am especially contemptuous of such imagery when it is applied to our Lord, from the pulpit, at Evensong” the letter continued.

Banner responded to the letter saying he thought that the “speculation was legitimate, whether or not you or I or anyone else disagrees with the interpretation.” 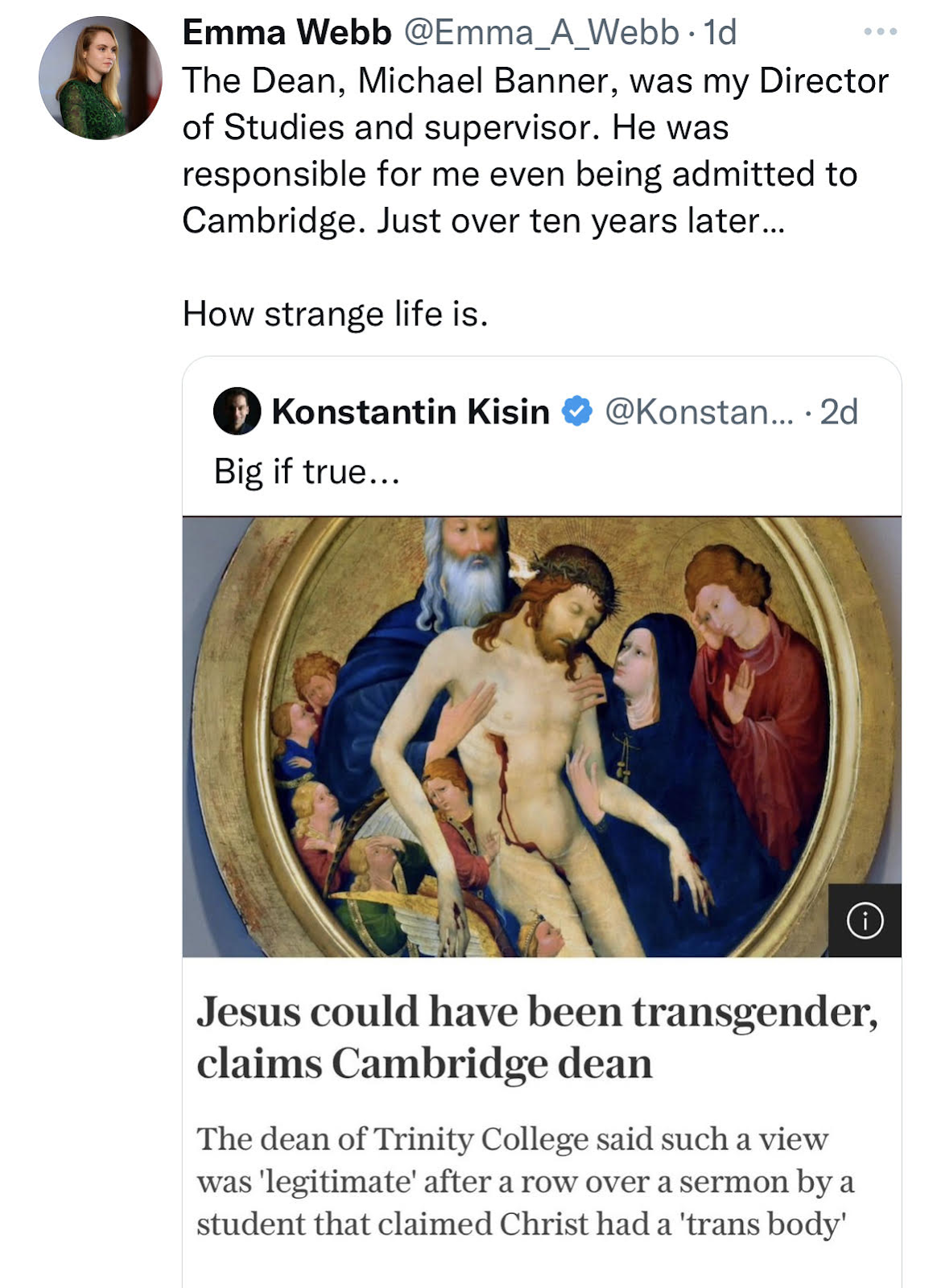 Emma Webb, a writer and broadcaster and director of the UK Common Sense Society, tweeted about the circumstance saying “The Dean, Michael Banner, was my Director of Studies and supervisor. He was responsible for me even being admitted to Cambridge. Just over ten years later… How strange life is.”

Every party in the story has been contacted for comment and will be updated accordingly.

Thomas Stevenson is a senior majoring in Public Relations at Brigham Young University in Provo, Utah,. He has been married to his wife for one year. He runs an independent conservative student publication called the Cougar Chronicle.