Clemson’s Undergraduate Student Government vice president claims that he is the victim of a “social lynching” following allegations that he snuck into women’s rooms to watch them undress.

On October 3, FitsNews released a Clemson University incident report regarding Jaren Stewart’s alleged conduct towards female residents while he served as a Resident Assistant (RA) in April. According to the incident report, “there were moments when RA Stewart would enter [the room] while the women were changing their clothes. When they asked him to leave, he would not remove himself from the room.”

"What I’m calling this is, ‘social lynching.’ It’s a punishment outside of the law by an informal group."

The Tiger Town Observer, a conservative Clemson student newspaper, later corroborated the story, comparing the incident report to the Office of Community and Ethical Standards’ standard incident form and reporting that an RA, who requested anonymity, confirmed that Stewart was fired as an RA and escorted from the residence hall.

Stewart came under fire for the allegations of severe misconduct, and faced articles of impeachment on Monday, October 9, during which meeting Stewart’s supporters packed the room and even resorted to sitting on the floor across the Senate hall.

During the announcement period following legislative debate, Stewart addressed the body regarding the allegations against him, and the public outrage surrounding them, calling it a “social lynching” while displaying a photo of the 1930 lynching of Thomas Shipp and Abram Smith on the projector. 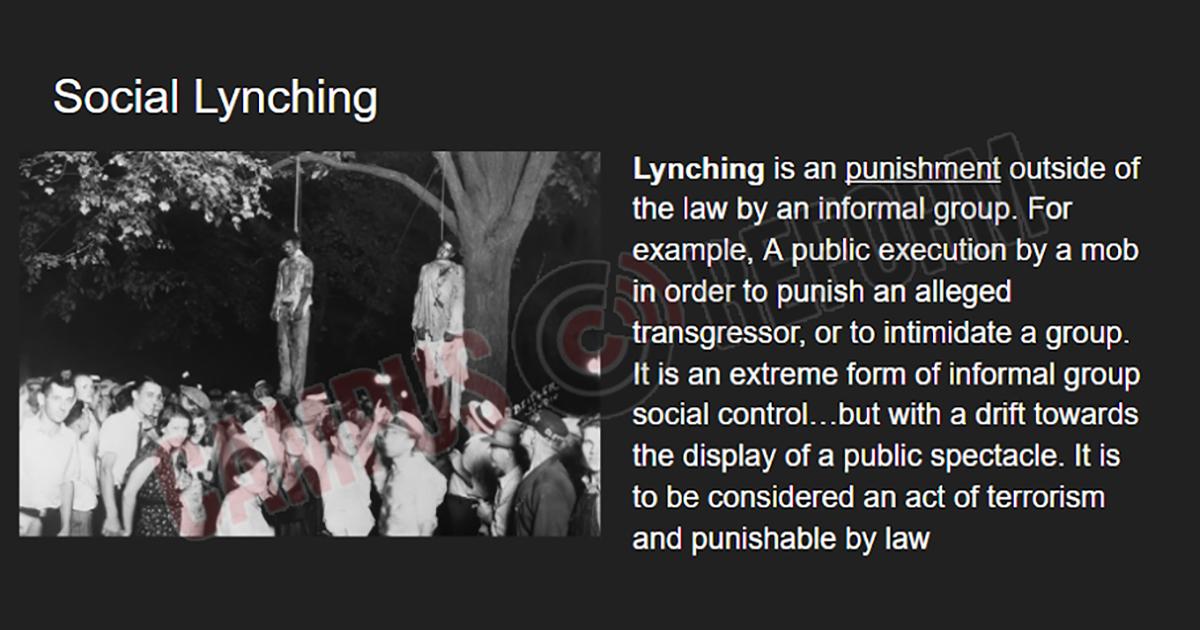 “What I’m calling this is, ‘social lynching.’ It’s a punishment outside of the law by an informal group,” he declared, saying that the conduct violation was “already adjudicated by OCES [Clemson’s Office of Community and Ethical Standards].”

Stewart also called the public outrage surrounding the allegations against him a “public execution by a mob in order to punish an alleged transgressor,” as well as “an extreme form of informal group social control” and “a public spectacle in order to persecute.”

Weeks earlier, Stewart, among other CUSG members, sat during the Pledge of Allegiance in protest President Donald Trump’s tweets calling for NFL players to be fired if they take a knee during the national anthem.

Stewart contended during his speech that the recent articles detailing the allegations against him were a form of “character assassination” designed to “discredit” him in retaliation for partaking in the protest.

Stewart also noted that the last African-American CUSG president held the office in 1980, arguing that the release of the RA misconduct allegations were a racist effort to derail his plans to become the Clemson student body president.

“There are certain people who do not want to see that come to fruition,” Stewart proclaimed, later adding, “this isn’t about conduct, this is about a stance I took from my platform.”

After Stewart’s presentation, CUSG Senator Miller Hoffman stood and moved for articles of impeachment against him.

According to the CUSG Senate’s procedural rules of operation, an objection requires a 2/3 majority to be upheld, but Senate President Leland Dunwoodie required a 2/3 majority to defeat the objection, effectively reversing the rules.

Ultimately, Dunwoodie ruled that the impeachment failed to pass, with 35 votes against the objection and 26 in favor.

Campus Reform reached out to Dunwoodie, but did not receive a response in time for publication. However, Dr. Chris Miller, Clemson Dean of Students and the CUSG Adviser, explained that he had met with Dunwoodie, who told him that the rule violation was accidental.

Dunwoodie later admitted to The Tiger News that only a simple majority is needed to rescind the ruling.