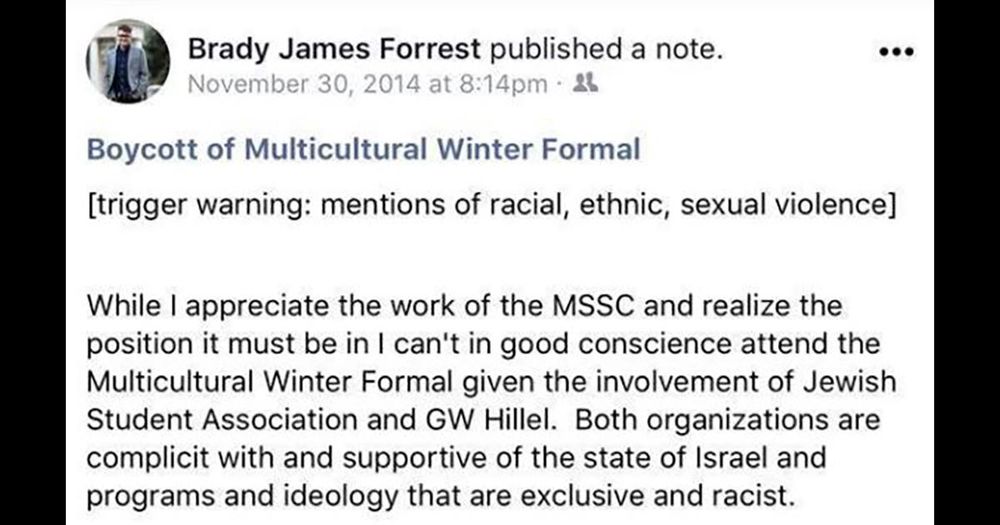 A George Washington University student was soundly defeated in his bid for a leadership position in student government following the revelation of an anti-Semitic Facebook post.

Brady Forrest, a Student Association (SA) senator who was running for executive vice president (EVP), called for a boycott of a Multicultural Winter Formal event in 2014 due to the presence of Jewish student groups, calling the groups “complicit” with an ideology that is "exclusive and racist.”

“While I appreciate the work of the MSSC and realize the position it must be in I can’t in good conscience attend the Multicultural Winter Formal given the involvement of Jewish Student Association and GW Hillel,” Forrest wrote at the time. “Both organizations are complicit with and supportive of the state of Israel and programs and ideology that are exclusive and racist.”

[RELATED: Prof outraged that prez would ‘welcome’ Zionists on campus]

The post was revealed in the Facebook group “Overheard at GW” on Monday night, just ahead of Wednesday’s SA elections, prompting nearly 70 student leaders to sign a letter calling on Forrest to resign from student government, according to The GW Hatchet.

Forrest, who had been endorsed by the GW student newspaper and five student organizations prior to the controversy, released a statement attempting to justify the post, arguing that “at that time, in the political moment, people had a greater awareness of the circumstances that I was writing in but clearly more information surrounding my posts is needed now given the way that I and my posts are being characterized.”

Forrest went on to claim that he believes Zionism and Judaism are “not the same,” explaining that “while thousands of Palestinians were without food, water, and shelter I did not want to get dressed up, go to the city view room, and eat nice food with people who had supported the actions that caused so much suffering.”

He added that his 2014 post “may have lacked clarity or context,” but did not explicitly apologize for the comments.

[RELATED: Marquette: McAdams to remain suspended until he apologizes]

Forrest similarly defended himself in an interview with the Hatchet, which subsequently rescinded its endorsement of Forrest on Tuesday, noting that the candidate’s post “alienated an entire group of students on campus by conflating all people of a religion, political view, and nationality as being ‘racist.’”

“Although it was written in 2014, he was already an SA senator at the time,” the paper added, saying, “It is deeply concerning that someone who was supposed to be a voice and representative for all students is on the record sharing their disgust of a group and several student organizations.”

Even GW’s Students for Justice in Palestine chapter condemned Forrest’s comments, asserting that he had been banned from the group three years ago because he “repeatedly acted in conflict with the values” of the chapter.

A former SA senator, Joe Vogel, said that he noticed anti-Jewish sentiment from Forrest while serving alongside him in student government.

“I heard Brady held back the nomination of an SA cabinet nominee simply because of her pro-Israel stance and Jewish identity,” Vogel wrote. “I watched Brady intentionally discriminate against Jewish candidates during Senate vacancy nominations, and when I voiced my concern I was silenced. I watched Brady lead the effort to remove me from the Senate, in what some of his fellow Senators vocalized was an intentional effort to remove my voice as a Jewish and pro-Israel Senator.”

On Tuesday, the Hatchet reported that Forrest had said he would not suspend his campaign for EVP or resign his current senate seat, but he became more circumspect the very next day, declining to say whether he would heed the demands of the student leaders who want him to step down.

Although the Hatchet abstained from endorsing his opponent when it disavowed Forrest, Ojani Walthrust clearly benefited from the scandal, winning the EVP election overwhelmingly with over 70 percent of the vote.

Campus Reform reached out to Forrest for comment, but did not receive a response in time for publication.