Prof claims ‘civility’ is a euphemism for ‘white supremacy’

Amidst widespread calls for a return to civility, especially when it comes to political differences, one professor took to Twitter to declare that calls for civility are just a cover for "white supremacy."

Simran Jeet Singh, who calls himself an "anti-racist activist," argued that since Europeans colonized peoples they considered "uncivilized," calls for civility are just an extension of "whiteness" and "European colonialism." 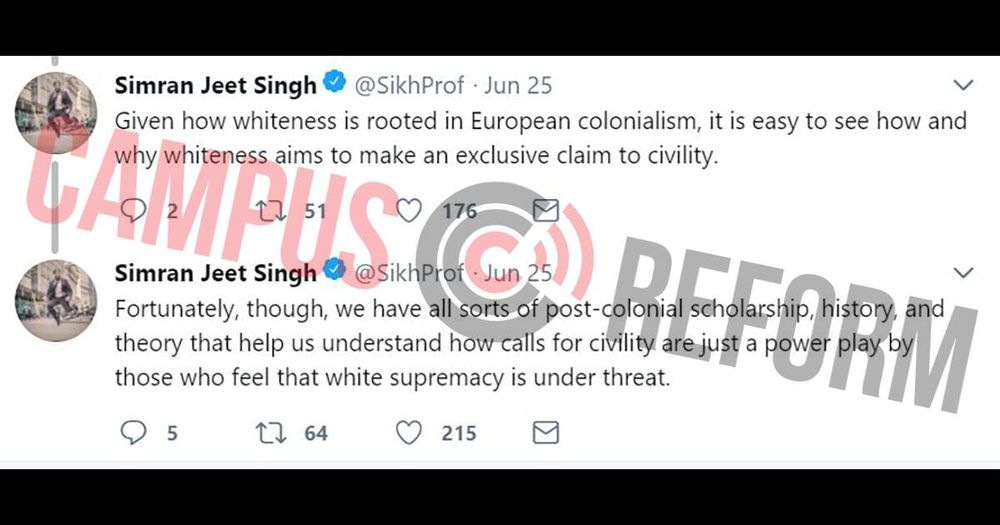 A New York University educator recently asserted that current "calls for civility are just a power play by those who feel that white supremacy is under threat."

Simran Jeet Singh, a Henry R. Luce Post-Doctoral Fellow for Religion in International Affairs at NYU’s Center for Religion and Media, made the claim Monday evening in two Twitter threads that appeared to be a response to widespread calls for civility after Maxine Waters publicly endorsed the mass harassment of members of the Trump administration this weekend.

Singh, who describes himself as an “anti-racist activist,” proposed in the first thread that “lecturing people of color about civility in this climate is an ultimate sign of privilege.”

“If you don’t know what it’s like to fight for your life every single day, then it might not be your place to tell us how to fight personal and systemic racism,” he asserts, later adding that “they mobilize and run these dehumanizing racist systems—and then they ask us to be more civil?”

“Civility is racially coded, too,” Singh explains in the second thread.

“Europeans described those they colonized as uncivilized people’s (barbaric, backwards, savages) in need of civilizing,” he claims. “This logic was central to the colonial enterprise.”

According to the academic, the entire concept of “civility” is rooted in white supremacy, because “part of the colonial legacy is the continued representation of people of color as being less civil,” adding that “this stereotype continues to permeate our social imaginations.”

“Given how whiteness is rooted in European colonialism,” he says, “it is easy to see how and why whiteness aims to make an exclusive claim to civility.”

Singh concludes his remarks by arguing that “calls for civility are just a power play by those who feel that white supremacy is under threat.”

Singh also made headlines last summer, after posting a number of tweets disparaging Trump supporters, including a statement that “all Trump supporters tacitly condone racism” and a controversial photograph of his brother making two middle-finger gestures in front of then president elect Trump’s New York City residence.

Campus Reform reached out to Singh for comment, but has not received a response.