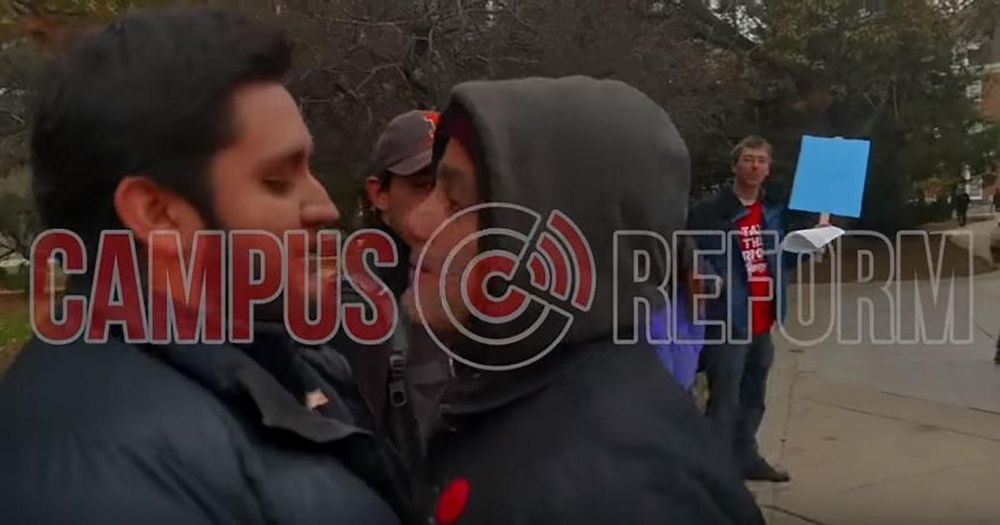 The University of Illinois at Urbana-Champaign is seeking to dismiss a lawsuit accusing the school of violating the First Amendment rights of three students.

The three students—Andrew Minik, Joel Valdez, and Blair Nelson—are all Campus Reform correspondents. Valdez and Nelson were both present at an anti-Trump rally in November, during which they recorded video of Khan charging at them and throwing Nelson’s phone on the sidewalk, and Minik covered the incident for Campus Reform.

According to the Associated Press, Khan has now filed a counterclaim for $50,000, accusing the students of hate crimes and “intentional infliction of emotional distress” because his contact information was distributed on websites “known to be supported by racists and hate-group supporters.”

According to the original lawsuit, Khan is “affiliated with a number of extreme left-wing groups including the Black Rose Anarchist Federation, an ‘Antifa’ group advocating revolution and expressly justifying political violence.”

The Black Rose Anarchist Federation is “inspired” by several ideologies including “anarchist-communism,” and “anarcho-syndicalism,” the organization explains in its mission statement.

The lawsuit notes that administrators issued “no-contact” orders to the three students following the altercation with Khan, explicitly barring them from “observing, reporting, or videoing Khan and his activities on campus.” Given Khan’s prominent involvement in left-wing activism on campus, they contend that the orders effectively prevented them from functioning as student journalists.

“I was told that if I wanted the ‘situation to improve’ that I should stop writing about Khan,” Minik told the law firm in April.

The university, however, is arguing that the no-contact orders were not based on the content of the students’ reporting, and did not explicitly forbid them from publishing news articles.

“The targeted restriction in contacting Khan does not prevent plaintiffs from gathering information about him and his activities from other sources and in no way interferes with their right to publish that information,” university attorney Charles Schmadeke insisted in a statement.

The students, for their part, say there is still time for the school to acknowledge its mishandling of the situation.

“I hope the university does the right thing,” Minik told Campus Reform. “No student should face the abuse we have endured just for reporting the news."