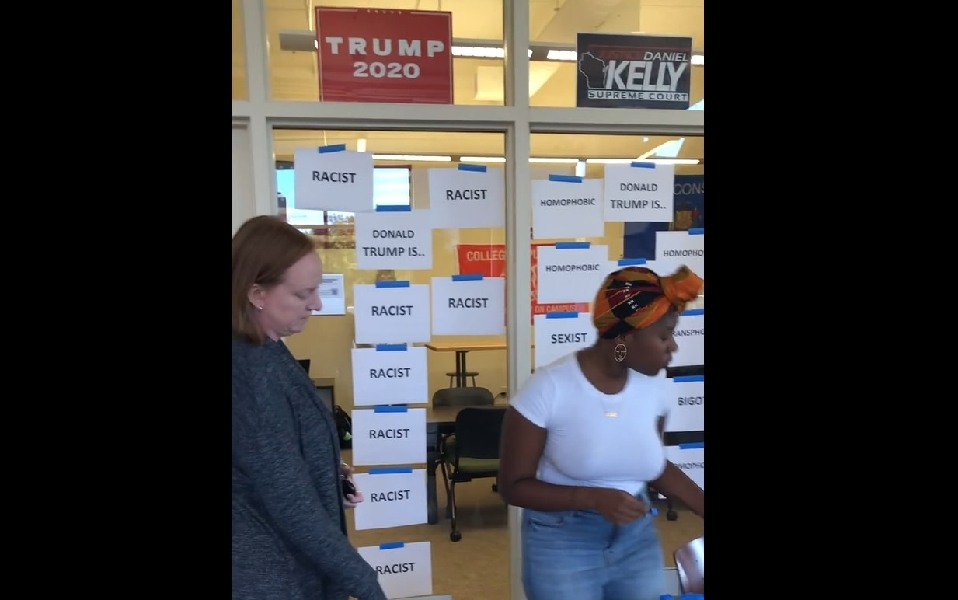 At UW-Madison, a College Republicans office was plastered with anti-Trump flyers on Wednesday in new video obtained by Campus Reform.

In the video, two female students are seen, one of whom is taping to an indoor office window some flyers stating terms such as "homophobic," "racist," "sexist," and "bigot," beneath “Donald Trump is…” flyers. More than 20 flyers covered the office windows.

UW-Madison College Republicans chairman Ryan Christens told Campus Reform that one of the demonstrators yelled "F*** that" after she was confronted. She then said that she would tape the flyers every single day, according to Christens' account. She also played a song in the background containing the words "F*** Donald Trump."

Christens said that a university staffer eventually began removing the flyers, saying that the signs were unapproved according to university policy, which states, “No person may erect, post or attach any notices, posters, pictures or any item of a similar nature in or on any building or upon other university lands except on regularly established bulletin boards, or as authorized.”

The demonstrators immediately left the building after the Dean of Students Office was contacted, according to Christens.

“We are very pleased with how UW-Madison has handled this situation thus far,” the UM-Madison College Republicans told Campus Reform. “[We] are always willing to engage in respectful dialogue with students we disagree with, but it was clear this student had no intention of engaging in a civil discussion.”

Meredith McGlone, director of UW-Madison News and Media Relations, informed Campus Reform that “UW-Madison supports the free speech rights of its students along with civil discourse around political issues. The university’s policies prohibit the posting of unapproved signs, posters and other material in public spaces.”

"The university is aware of a Wednesday afternoon incident at the College Republicans Registered Student Organization office at the Student Activity Center. The Office of Student Conduct and Community Standards is reviewing the incident and will follow up as appropriate," McGlone added.