A NCSU student provided Campus Reform with graded assignments in which a TA wrote that conservativism has "white supremacist traits."

The TA also suggested the idea of meritocracy is racist and said that conservative commentator Candace Owens is a supporter of "new racism." 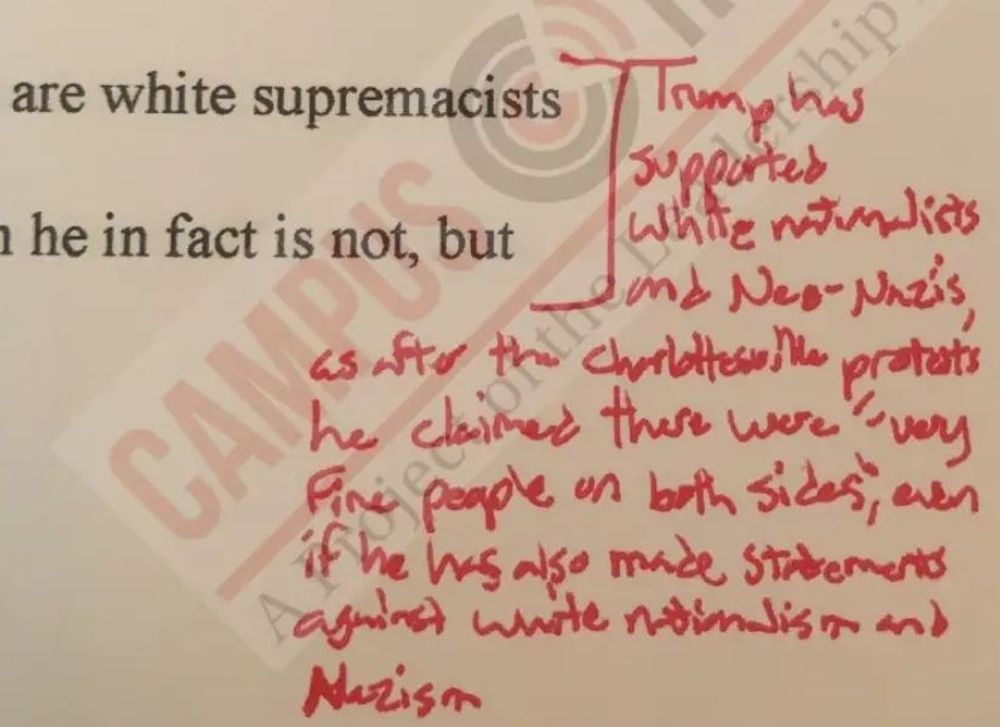 A teaching assistant for a course titled Racial and Ethnic Issues at North Carolina State University claimed that President Donald Trump “supported white nationalists and neo-Nazis” and likened meritocracy to racism. The TA, Christian Alberg, wrote the remarks as feedback on one of several student assignments obtained by Campus Reform via student Victoria Howell.

“This is true to a degree, as many views commonly held by conservatives would be considered new white supremacy, but so could statements from Obama supporting the idea of meritocracy,” Alberg wrote.

Later in the same essay, Howell questioned the media’s labeling of Trump and his administration as “white supremacists” and “neo-Nazis.” Alberg defended the media in his comments.

“Trump has supported white nationalists and neo-Nazis, as after the Charlottesville protests he claimed there were “very fine people on both sides,” even if he has also made statements against white nationalism and Nazism.”  In another section of the essay,  Alberg referred to Howell’s criticism of the breakdown of the nuclear family in the African American community as “new racism.”

According to the course, “new racism” is described as “a new form of white supremacy” with views that “are far from rare.” PowerPoint slides from the course indicated “new white supremacy” includes believing that groups “should not receive any treatment or government-sponsored assistance.”

“Yes, opposition to government assistance is linked to white supremacy because its [sic] been largely motivated by the view that minorities--especially, African Americans--are lazy and undeserving,” Thomas said. “You don't want to help lazy people who would rather live off of welfare rather than work.  The research supports the link between white supremacist beliefs and this policy position.”

“The "Make American Great Again" and "Take Our Country Back" slogans were debated as being racist,” Thomas said of the Trump slogans. “The students overwhelmingly thought it was. One Trump supporter in a video, when pressed, said America was great in the 1950s--not a great time for blacks. I cautioned that you could make a case that it is racist, but  it's tough to know what's in people's minds.”

Thomas also added that the information presented in his classes is “based on scientific research--not right or left-wing ‘alternative facts’ or opinions,” and said that Howell’s grade was tied to her answers, not opinions.

“The student lost points because their answers were factually incorrect and not because of their conservative beliefs.”

Howell received a 0 percent grade on the essay assignment. She told Campus Reform that Thomas told her she received 0 percent because she “didn’t do the assignment because [she] didn’t discuss the topic correctly.”

One question indicates that meritocracy is “a belief system in America that obscures institutional and systemic racism.”

A separate essay submitted by Howell shows Alberg’s comments on the left-wing extremist group Antifa and conservative commentator Candace Owens.  In one comment, Alberg claimed Owens was a supporter of “new racism” and “white supremacist ideology.”

“Candace Owens has been an ardent supporter of the “New Racism” described in class...While this does not justify her being cursed at and having items thrown at her, it is logical for people in her racial group to distance themselves from her and disavow her actions,” Alberg wrote.

Campus Reform reached out to Alberg but received no response in time for publication.

In a statement to Campus Reform, Howell said she hopes her story will encourage other conservative students to speak out.

“I don't think many people truly understand just how bad it is to be in college as a conservative student,” Howell said. “Many conservative students won't speak out or speak up about these issues because they know that they can be graded poorly for doing so or even physically or verbally harassed if they do. I've even had students talk to me after class to tell me they support me and my opposition to the comments and remarks my professor has made, they just don't have the guts to do it themselves because they're concerned for their grade.”

“This story is going to help shed light on just how biased many professors can be to get their political and social agendas across,” she added. “I want my experience to be an eye-opening story for other conservatives to speak up on campus and allow them to have a voice, especially if they're being persecuted in their classes for their political affiliation.”