A teaching assistant at Cornell University said that their College Republicans chapter is supporting catholic priests who sexually abuse children because of their decision to bring Scott Walker to speak.

When contacted by Campus Reform, she told the reporter “See you in hell.”

A teaching assistant at Cornell University accused the school’s Republican student organization of supporting the sexual abuse of children.

Cornell teaching assistant Irene Hartmann made the accusation in a letter to the editor published in The Cornell Daily Sun, in which she took issue with the organization hosting former Wisconsin Gov. Scott Walker for a recent speaking event.

“If you are a Catholic priest whose records of molestation are so severe that the Diocese defrocks you so that you need a license to work with children, Cornell Republicans are here for you (or, at least, until a political opponent brings this to national attention),” Hartmann wrote.

Earlier in the letter, Hartmann jokingly said that she was “grateful” that the Cornell Republicans group was hosting Walker since it shows “who they are and what they stand for.”

“Although the talk will likely focus on anti-union rhetoric under the guise of the “free market,” there is no denying that by welcoming Walker to campus, Cornell Republicans are co-signing political patronage in the form of dark money donations and giving quarter to pedophiles instead of prosecuting them,” she wrote.

The allegation of supporting priests who sexually abuse children stems from Walker’s administration giving or renewing professional licenses to four ex-priests who were defrocked as a result of sexually abusing children, according to the Milwaukee Journal Sentinel.

After Walker found out about the situation, a spokesperson told the newspaper that “[t]he governor believes they should lose their licenses.”

“Ms. Hartmann’s claim regarding the defrocked priests was debunked by the article she linked to in her letter,” Schorr said. “Bureaucrats in Wisconsin’s Department of Safety and Professional Services granted licenses to the defrocked priests, Governor Walker wasn’t involved until he found out the situation—at which point he made efforts to rectify it.”

Hartmann told Campus Reform that she stands by everything she said and signed her email with: “See you in hell.”

When Hartmann was challenged on the accusations she made in the letter to the editor, she didn’t apologize, and stood firm.

“My accusations stand - unless you plan to accept that Scott Walker attacked a civil servant who identified a problem and fixed it instead of giving pedophiles access to vulnerable people,” Hartmann wrote on Facebook. 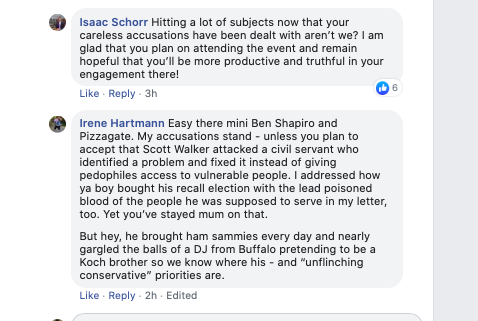 “TL; DR version: National Review sucks, Scott Walker sucks, bringing him to campus is an intentional inflammatory decision (that also sucks),” wrote Harmann. “Scott Walker used his power to hurt people. He tried to hurt lead poisoning victims in exchange for campaign donations - something Cornell Republicans believes is the moral equivalent of nurses and teachers unions that seek to improve the quality of healthcare and education for the public.”

Campus Reform reached out to Cornell for comment but did not receive a response.