Hundreds of law profs say Trump should be impeached

Hundreds of law professors have signed a letter saying that Trump has committed impeachable conduct.

A number of the professors listed are those on whom Campus Reform has previously reported. 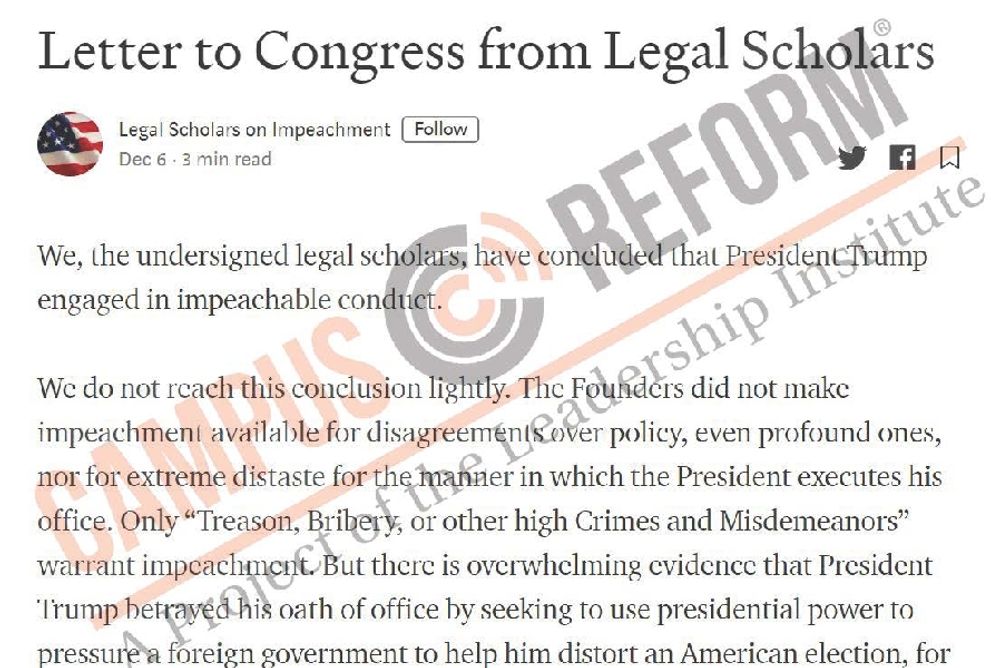 Hundreds of law school professors from around the country have signed a letter in support of impeaching President Donald Trump.

A post on Medium Friday titled, "Letter to Congress from Legal Scholars," containing 765 names at the time of publication of this article states that Trump "engaged in impeachable conduct." 50 of the signatories are educators from Ivy League institutuions.

"There is overwhelming evidence that President Trump betrayed his oath of office by seeking to use presidential power to pressure a foreign government to help him distort an American election, for his personal and political benefit, at the direct expense of national security interests as determined by Congress. His conduct is precisely the type of threat to our democracy that the Founders feared when they included the remedy of impeachment in the Constitution," the letter states.

The professors further state that they are not accusing the president of a crime, because "conduct need not be criminal to be impeachable."

[RELATED: Karlan claimed Trump showed 'defiance' of Constitution before he was president]

"Ultimately, whether to impeach the President and remove him from office depends on judgments that the Constitution leaves to Congress. But if the House of Representatives impeached the President for the conduct described here and the Senate voted to remove him, they would be acting well within their constitutional powers," the letter states.

The letter was published just days after a number of law professors testified before Congress, most of whom were in support of impeaching Trump, including Stanford Law Professor Pamela Karlan who, as Campus Reform reported, said even before Trump took office that he was in "defiance" of the Constitution.

“Nearly every president has probably done something that a court has later held unconstitutional or contrary to law,” Karlan said. “But I can’t think of one who had such an across-the-board combination of ignorance, indifference, and defiance.”