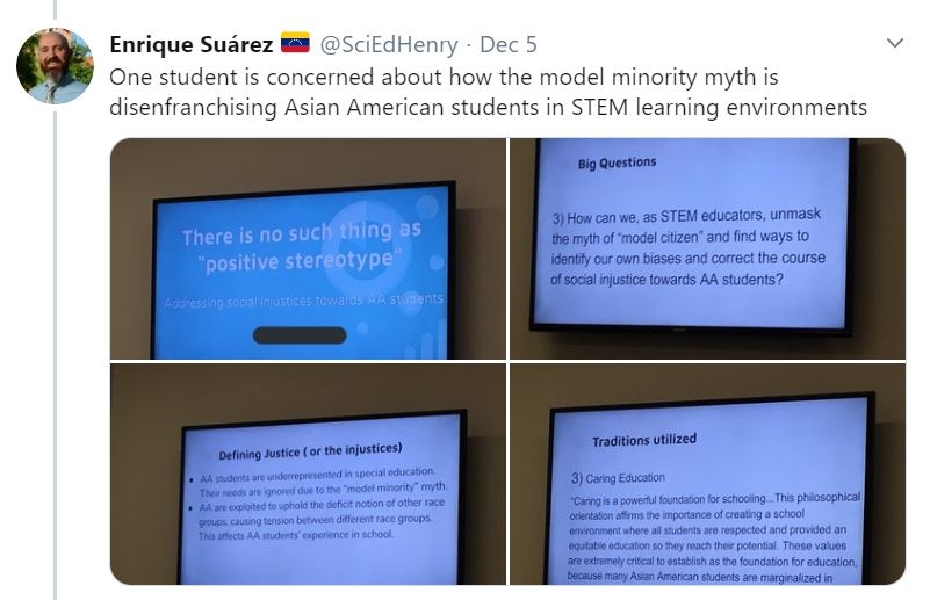 A professor at the University of Massachusetts-Amherst praised his students for presenting on their commitment to “Justice in STEM Education."

Assistant Professor of Science Education Enrique Suárez tweeted about his “Justice in STEM Education” course and shared students’ presentations about “their commitment to justice."

"Today’s our last class for the “Justice in STEM Education” course at @umasseduc  and I couldn’t be prouder of the students. They’re sharing their final papers and I’m blown away by the questions they’re addressing & their commitment to justice," the professor tweeted.

Today’s our last class for the “Justice in STEM Education” course at @umasseduc and I couldn’t be prouder of the students. They’re sharing their final papers and I’m blown away by the questions they’re addressing & their commitment to justice. I’ll be sharing some of their slides

One presentation, titled “There is No Such Thing as a Positive Stereotype” addressed social injustices toward Asian American students in STEM learning environments. The student asked the question, “How can we, as STEM educators, unmask the myth of 'model citizen' and find ways to identify their own biases and correct the course of social injustice towards [Asian American] students?" The student then presented how Asian Americans are underrepresented in special education. Another explains traditions and how they are “marginalized in schools."

One student is concerned about how the model minority myth is disenfranchising Asian American students in STEM learning environments pic.twitter.com/Md7SNZCzz4

Another student presented on “Decolonization in STEM Education” and posed the question, “How the **** are we supposed to Decolonize Public Education through the STEM Disciplines?”

The student presented, “Real change will happen only when settlers are forced into a reckoning of who they are, what they are, and what they have inherited; then they will be unable to function as colonials and begin instead to engage other peoples as respectful human beings.”

On another slide, the student suggested to remove the book, We’re Going on a Bear Hunt, because it “may be offensive to members of the bear clan. The student also suggested to “remove teddy grahams and yogurt. Replace with real bear food. Salmon, berries, and nuts.”

The fifth student is concerned with decolonizing a K-5 outdoor curriculum, understanding their positionality as a settler and partnering with local Native communities pic.twitter.com/AvlTzWIWTi

Another slide mentions “Defining Justice” with “Indigenous ways of Knowing, Disability Studies, Queer Theory, and Cyborg Theory." The student asks the question, “Where are students/classrooms situated?” by asking how they are defined by geographical location, who they are, “how the school defines them”, “by how society defines them”, and the student’s “assumptions as a teacher."

The final student (who’s also a secondary science PST) asks us to reconsider the “humanizing” v “dehumanizing” binary through multiple critical lenses, and is designing an ecology unit that prefigure new forms of culture-nature phenomena and relations pic.twitter.com/095sxfsc4x

[RELATED: University gets $1 million to fight ‘implicit bias in STEM]

Campus Reform reached out to Suárez and UMass-Amherst for comment but did not receive a response in time for publication.