Student protesters crasshed an Iowa Board of Regents meeting last week to demand free tuition and a response to alleged "white supremacists" on campus.

Students held up signs, including one that read, "Free college for all." 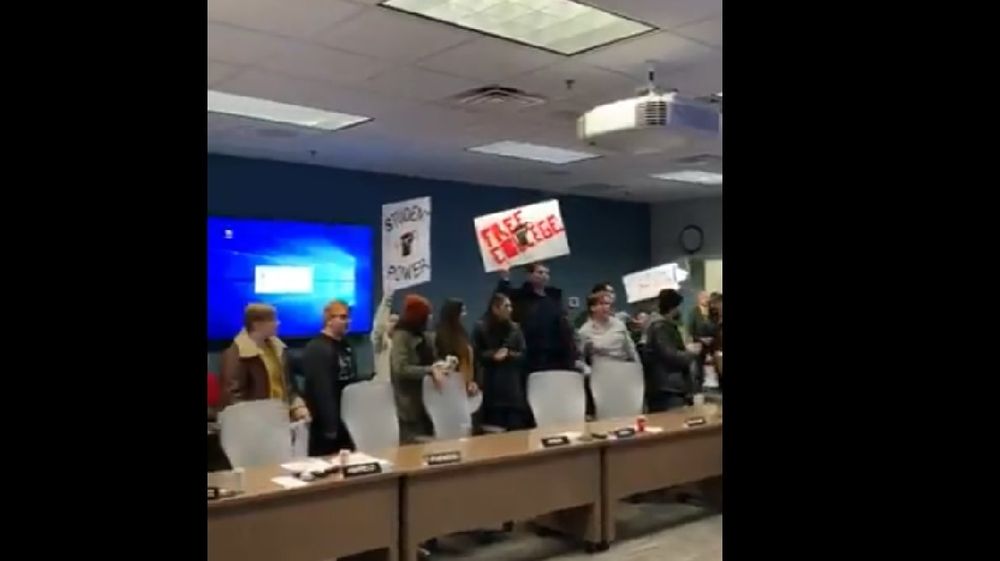 Student protesters stormed an Iowa Board of Regents meeting with signs and chants earlier this month-- calling on Iowa schools to freeze tuition and "respond" to racism.

According to The Cedar Rapids Gazette, students representing three of Iowa's public colleges disrupted a Board of Regents meeting, calling for a tuition freeze by chanting and singing. One student can be seen holding up a sign that reads, “Free college for all!”

"When they don't answer, shut it down," students are heard chanting in one video.

In addition to tuition demands, the students also had complaints about an alleged problem with "white supremacists" on campus.

“You sit by and do nothing while we, your students, are attacked by white supremacists and the administrations who don’t care about the true cost of raising tuition every year," said one student.

A video posted by The Gazette reporter Vanessa Miller shows the students gathered in the meeting and chanting in Spanish.

[RELATED: VIDEO: Sheriff Joe Arpaio event 'disrupted' by 'Antifa,' 'one of whom drew a knife']

Students have been protesting for 30 minutes at the regents meeting... pic.twitter.com/OMVnOT1KRs

Miller told Campus Reform that she found that the students were not from one particular school, but are part of a state-wide organization known as Iowa Student Action.

The Iowa Board of Regents presides over the state’s three public universities: the University of Iowa, the University of Northern Iowa and Iowa State University. The board’s executive director, Mark Braun, told The Gazette that he offered the students several opportunities to discuss their grievances personally.

“I offered to them to sit down and figure out how we can get something worked out where there can be a dialogue, back and forth… They demanded that the board respond today.”

Before the protest took place, the board scheduled an hour of time for the public to make their concerns known. None of the protestors participated.

“There was a window from 12 p.m. to 1 p.m.,” Braun stated. “The board would have sat and listened to everything that they had to say. They missed that window or chose not to take that window.”

Campus Reform reached out to Braun for additional questions. He declined to comment.

As the student protestors demanded immediate action from those involved, board president Michael Richards expressed similar disdain-- expressing that the students have a misunderstanding of how things work.

“We don’t have anything to do with the appropriation side of it — that’s the Legislature,” Richards said.

Campus Reform reached out to each school, as well as Iowa Student Action for comment, but did not receive responses in time for publication.