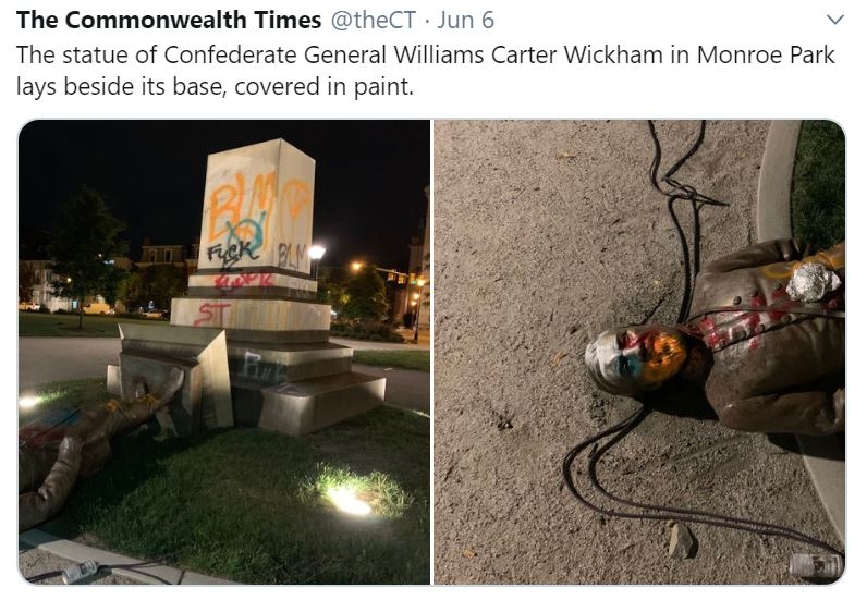 Amid protests in Richmond, Virginia, a statue of confederate leader  Williams Carter Wickham that stood near an entrance to a Virginia university was torn down Saturday.

Concluding a protest held in Monroe Park, protesters covered the statue in graffiti, then ripped it down from its pedestal. The Richmond Police Department confirmed to Campus Reform that the statue was toppled shortly before 11 p.m.

The Commonwealth Times shared photos of the overturned statue on Twitter.

The statue of Confederate General Williams Carter Wickham in Monroe Park lays beside its base, covered in paint. pic.twitter.com/D6EgslhpS7

Following the demonstrations, the fallen statue was removed from the park for safety reasons, Richmond police told Campus Reform.

According to WVTR-TV, the statue, which stood near a crosswalk leading to the Virginia Commonwealth University campus, was 129 years old. The monument displayed confederate leader Williams Carter Wickham, who was a Richmond native and lawyer, plantation owner, and politician, according to The New York Daily News.

Descendants of Wickham requested the removal of the statue in 2017, writing, “We want to be sure you know that, as a plantation owner, Confederate general, and industrialist, General Wickham unapologetically accrued power and wealth through the exploitation of enslaved people.” Their request was denied.

This incident comes amid the destruction of multiple monuments across the United States.

Virginia Democratic Gov. Ralph Northam announced that a statue of General Robert E. Lee would be relocated from a prominent position in the city of Richmond. Officials spent Monday inspecting the statue and preparing to remove it.