One conservative blasted the students for treating the university as an "insurance policy" instead of an educational institution. 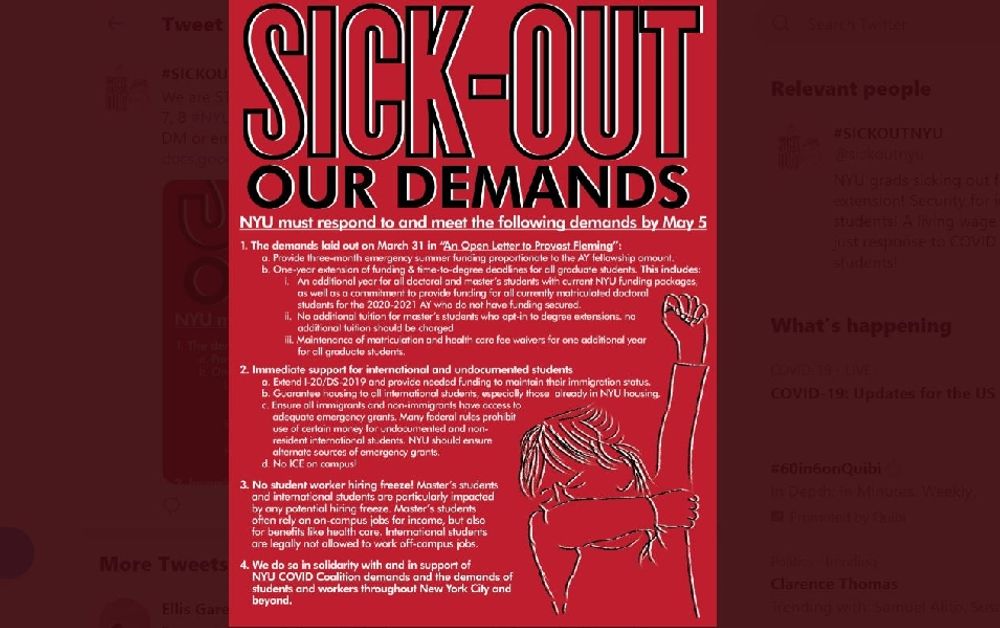 Students posted their list of demands on Twitter. The first demand was previously demanded in late March as an open letter to NYU Provost Katherine Fleming with more than 500 signatures. Student organizer Jackson Smith said that NYU has “...failed to address the crisis and what the crisis means for graduate students," the Washington Square News reported.

The letter asks for one-year extensions on their time to finish their degrees, tuition waivers for students opting into the deadline extensions, and not be charged for any additional time to complete their schooling. It also asks that all health care fees be included for free. Among the students' demands are "emergency grants" for illegal immigrant students and that there be "No ICE on campus!"

Another demand is that there be "no student worker hiring freeze," especially since illegal students can not legally work off-campus.

In response to the planned sick-out, NYU spokesperson, John Beckman said, “The university is sympathetic to adverse situations that COVID-19 has caused for many in the University, including graduate students. Nevertheless, a job action by graduate workers would be a violation of the contract they signed and agreed to.”

The Heritage Foundation’s Rachel Greszler told Campus Reform that, “attempting to strong-arm the University into adding an entirely new set of compensation and benefits by violating the no-strike provision of their contract does not seem like the best strategy. That primarily hurts the students who lost out on teaching they needed to complete their courses."

“COVID-19 has brought about financial strains for individuals, families, businesses, governments, and universities. Many businesses are struggling to survive and have implemented layoffs, pay cuts, and other reductions in compensation," Greszler added. “Universities face significant financial concerns as enrollment will be down and many individuals and families will not be able to pay their tuition. While graduate students’ concerns should be heard and could be addressed through flexible policies such as need-based relief, it’s unfair and irrational for graduate students to assume that they should be held harmless by the university for all coronavirus-related disruptions and hardships."

“This situation highlights why graduate students should not be unionized in the first place," he continued. “Some of the requests seem to treat the university as an insurance policy instead of an educational institution. Meeting all of the graduate students’ demands for things above and beyond their contract would mean fewer resources to assist struggling students and families, and fewer resources to prevent other layoffs across the university."

Follow the author of this article on Twiter: @Jess_Custodio