A Seattle-area college sent out an email, making its students aware of "opportunities" to participate in events related to the "Black Lives Matter" movement.

This comes as the college remains entirely online due to concerns about COVID-19 transmission, and Seattle’s government is unable to assert control over the whole city. 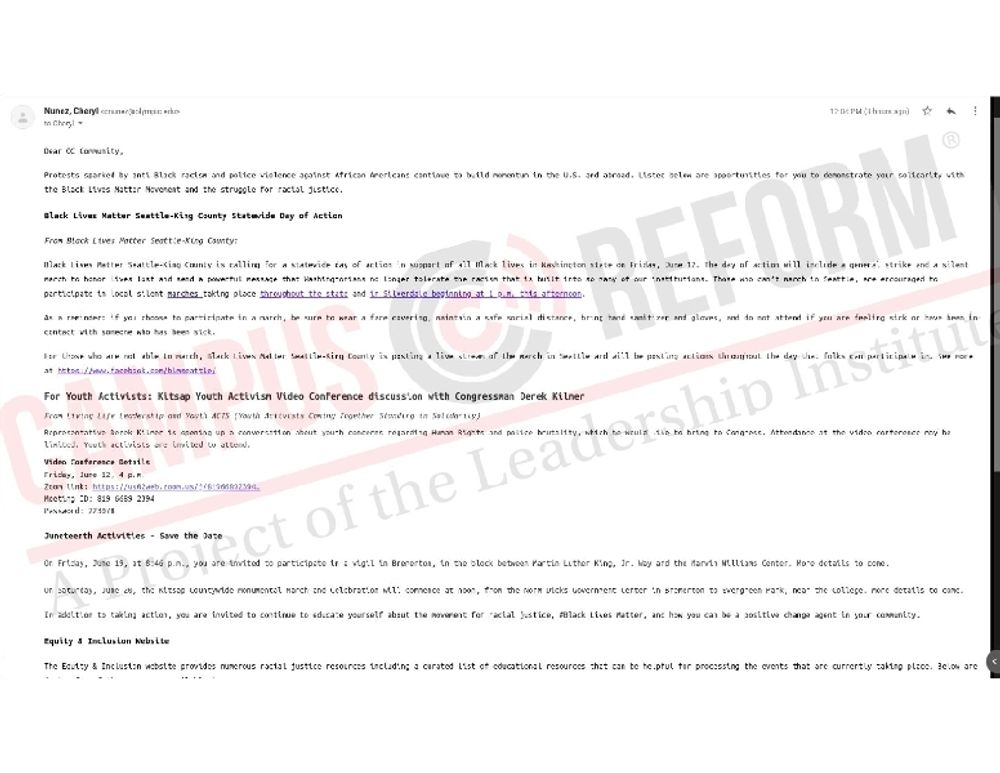 Olympic College’s Office of Diversity and Inclusion encouraged students to participate in protests related to the "Black Lives Matter" movement, despite the college’s continued closure due to the COVID-19 pandemic.

In an email obtained by Campus Reform, Olympic College’s Office of Diversity and Inclusion advertised a number of events in the Seattle area related to the "Black Lives Matter" movement. Though some of the events advertised, such as a video conference about racial justice with Rep. Derek Kilmer (D-Wash.) were to be conducted online, others were set to take place in person.

One event, sponsored by the Seattle-King County branch of "Black Lives Matter" was advertised as a “silent march and general strike."

The march component of this event was designated to begin at Seattle’s Judkins Park and end at Jefferson Park, lasting more than an hour. Though the notice encouraged the wearing of a face covering and gloves, it did not indicate that people without such protective equipment would be turned away in the interest of public health.

Other events promoted by the office were scheduled for June 19th, in Bremerton Washington to observe "Juneteenth." These include an outdoor vigil, and the “Kitsap County Monumental March.”  No information was included underneath these announcements about precautions being taken to prevent the transmission of the coronavirus at these events.

In the email, its author, Cheryl Nunez described the events as "opportunities" to "demonstrate your solidarity with the Black Lives Matter Movement and the struggle for racial justice.”  Nunez is the Vice President of Diversity and Inclusion at the Seattle-area community college which has locations in Bremerton, Poulsbo, and Shelton, Washington.  Though Nunez’s office is promoting events that will presumably be crowded and in violation of health authorities’ social distancing guidelines, Olympic College is still conducting all classes and extracurricular events online. Its website states that classes will be "predominantly online" for the "summer and fall quarters."

This comes as Seattle recovers from protests in response to the death of George Floyd in Minneapolis. Though initial protests were peaceful, others became violent and turned into riots.  The situation was so severe on the weekend of May 28 that the city’s mayor implemented a curfew to minimize further violence and damage to property. Fifty-five people were arrested.

Meanwhile, the city of Seattle still lacks control over a small swath of its Capitol Hill neighborhood, which demonstrators have dubbed “the Capitol Hill Autonomous Zone" (CHAZ) and later the "Capitol Hill Occupied Protest" (CHOP), declaring supposed independence from the United States of America.

Campus Reform reached out to Nunez but did not receive a response in time for publication.