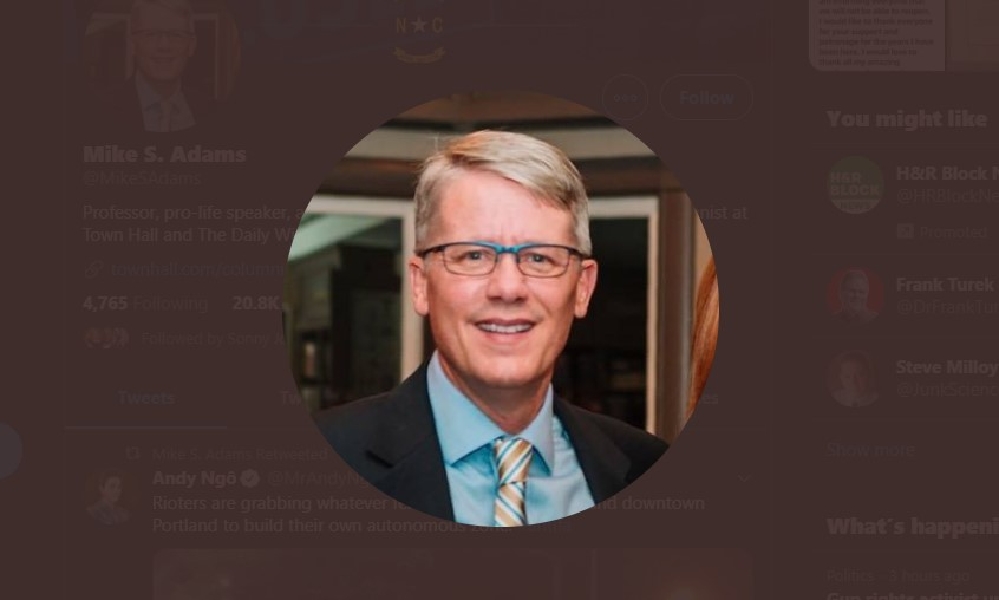 UNC-Wilmington students and professors rallied against criminology and sociology professor Mike Adams, calling for him to be fired after several of Adams’ social media posts were condemned by the school as “vile and inexcusable."

"After a discussion with Chancellor Sartarelli, Dr. Adams has decided to retire from UNCW.”

“We can confirm we are very carefully and assertively reviewing our options in terms of how to proceed. We are not able to comment further at this time, as this is a personnel matter,” the university told CNN before announcing on June 29 that “after a discussion with Chancellor Sartarelli, Dr. Adams has decided to retire from UNCW.”

The first tweet in question read, “This evening I ate pizza and drank beer with six guys at a six seat table top. I almost felt like a free man who was not living in the slave state of North Carolina. Massa Cooper, let my people go!.”

A day later, Adams tweeted, “Don’t shut down the universities. Shut down the non essential majors. Like Women’s Studies.”

The campaign against Adams extended outside of the UNCW community. Actor Orlando Jones took to Twitter to say, “As a resident of Wilmington NC & father. Mike Adams, a professor @UNCWilmingon is a problem!”

One Tree Hill actress Sophia Bush also voiced her opinions on Twitter by quoting Jones’ tweet and adding, “Ummm. @UNCWilmington. How do you employ this person?!? The racism and misogyny are atrocious. This feels like another change for Wilmington that the #OTHfam could make some noise about.”

An online petition amassed more than 28,000 signatures calling for the university to fire Mike Adams from UNCW and asking supporters to not apply to or fund the school. The petition cites multiple tweets from Adams including some critical of the Black Lives Matter movement.

[RELATED: Students call for laxed grading for black students. University goes along with it.]

“This petition is also an individual's pledge to withhold any financial support to the University of North Carolina-Wilmington until Mike Adams is removed. This includes withholding alumni endowments, and any donations,” reads the petition, which claims that Adams “has a long history of espousing racist, misogynistic, homophobic, and abusive rhetoric…"

The petition claims that Adams “does not belong in a position of teaching young students, and perpetuating racism by instilling ideals that white culture is superior to others.”

“Especially as a criminology professor, potentially seeding dangerous behavior in minds seeking a future in law enforcement. His own comments clearly portray an individual who believes people of color's culture and morals are inferior to his own. Mike Adams enjoys his 1st amendment rights, just as we all should. Express yours by telling Mike Adams and UNCW (a public university) that NC tax payers won't help fund his salary, and that freedom of speech does not mean freedom of consequence," it continued.

“I believe Adams is a terrible representation of what UNCW tries to stand for,” UNCW Student and SGA Senator, Rosemary Colen told The Seahawk saying, “If UNCW wants to work on building a bridge with cultural centers and bringing in more students of color, you cannot have racist professors teaching criminology and sociology at your institution. You cannot be smart and racist, you cannot be smart and xenophobic, you cannot have this disgusting rhetoric and be in charge of teaching the next generation, he has to go or the black student body is leaving.”