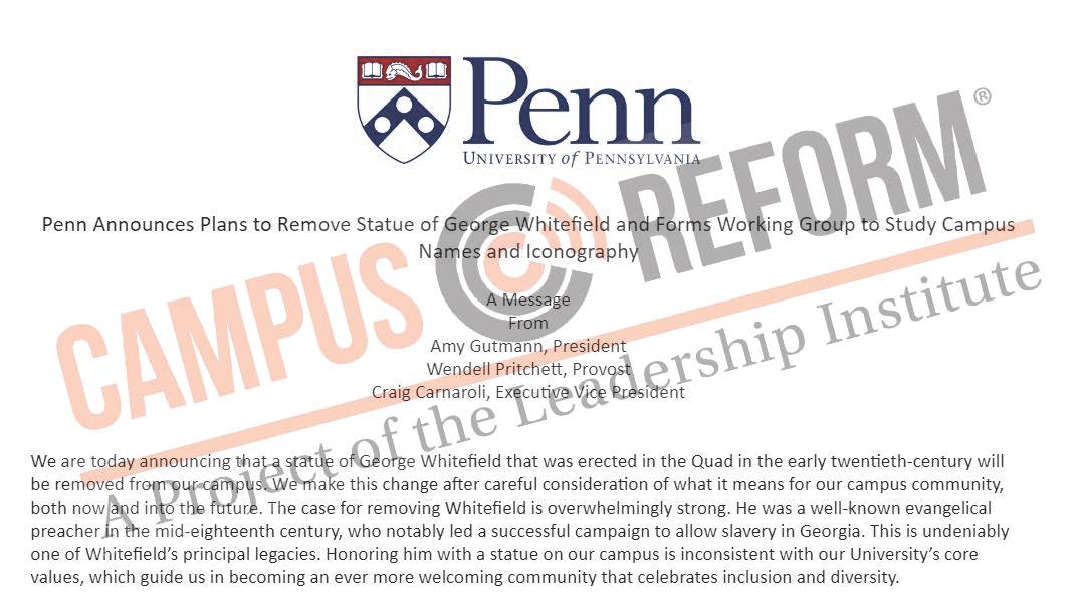 A university email stated that “the case for removing Whitefield is overwhelmingly strong,” and that there is “absolutely no justification” for keeping the monument.

“the case for removing Whitefield is overwhelmingly strong"

Citing his ownership of slaves and successful campaign to allow slavery in Georgia, the email says that “honoring him with a statue on our campus is inconsistent with our University’s core values, which guide us in becoming an ever more welcoming community that celebrates inclusion and diversity.”

The decision follows research from the Penn and Slavery Project, which is tasked with researching the university’s ties to American slavery since its founding in 1740. Whitefield assisted his close friend Benjamin Franklin with founding the Academy of Philadelphia, which later became the University of Pennsylvania.

George Whitefield was one of the most prominent public figures of the eighteenth century, and he helped to articulate much of the doctrine and culture of what eventually became the American evangelical movement. Though he accepted a donation of slaves as a gift in order to maintain the profitability of his orphanage in Georgia, he consistently campaigned for slaves’ education and humanity throughout his lifetime. Whitefield was glowingly eulogized by Phillis Wheatley, a former slave and early American writer.

Jessica Gooding, a columnist for the Daily Pennsylvanian, published an opinion piece advocating for the statue’s removal: “As Philadelphia reckons with its own racist statues of Christopher Columbus and Frank Rizzo, now is the time for Penn to do the same on its own campus.”

Penn will indeed continue to evaluate other public monuments. Along with the announcement of the statue’s removal came news of the formation of a “Campus Iconography Group,” which will continue to review statues and public artwork to better reflect “our achievements and aspirations to increase the diversity of the Penn community.”