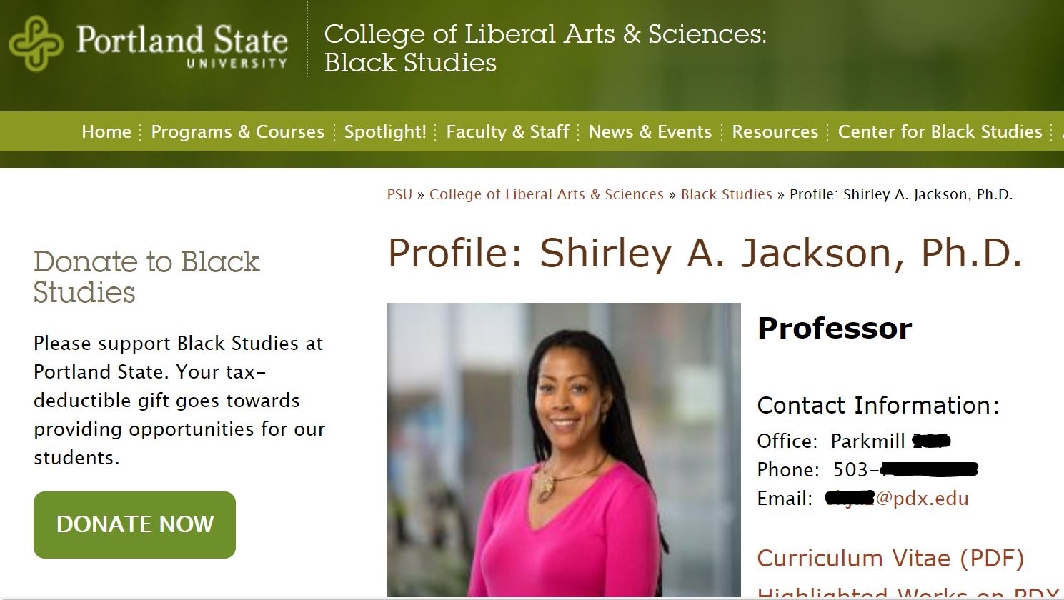 Portland State University Black Studies Professor Shirley Jackson recently offered criticism of the riots in her home city during an interview, in which she expressed frustration on behalf of the Black community regarding the city’s mostly White protesters.

“I’m going to use the word that many, many people in the Black community are using,” Jackson told KGW-TV. “It seems that the movement that originally existed has been hijacked."

“It seems that the movement that originally existed has been hijacked

Jackson went on to discuss how she believes the original message of the movement has been obfuscated by the recent actions of the city’s activists.

“It’s almost as though the African American community has become forgotten in large part, and the people who have now taken center stage may not be aware of their own privilege in directing this movement into something that was not intended," Jackson said. “There is the real fear that this is going to have a backlash to not only how people look at the Black Lives Matter movement but how they look at Portland.”

Campus Reform reached out to Jackson to see if she would be willing to expand on those statements.

When asked about the ways in which White activists are shifting the focus of the movement, Jackson told Campus Reform that while “some White activists remain committed to BLM” with “authentic and unwavering support” she said, “others may be misdirecting current protests away from BLM.” These White activists, she says, “whether intended or not” choose to “engage in protests that puts them ‘front and center’” which “can take away from the movement if they are not actively engaged in ensuring the philosophy and goals of BLM.”

Jackson went on to state that “African Americans in and around Portland are asking that White activists continue to show their support but that they do not take control of a movement that has its roots in the African American community."

When asked about the violence in Portland being carried out by its predominantly White activists, Jackson said ”BLM is being harmed due to perceptions of the movement as violent by those who believe that what they are seeing in Portland is an accurate portrayal of BLM.”

Jackson claimed that much of what people are seeing “is more than one movement.” explaining that “it is not uncommon for movements to shift or splinter into other movements so that the message of the original movement becomes lost."

Of the July 26 riot in front of a Portland federal courthouse Jackson said the rioter’s “ demands are unclear or yet to be vocalized” unlike the “demands made at the start of the movement” which had to do with police reform. She called the deployment of federal forces to the courthouse “a federal response to protect federal property” but also labeled the response “heavy-handed” going on to predict that “it does not appear that an end is in sight because the feds are not going to acquiesce federal property and those who are fighting to gain access are not clear in their rationale for this goal,” calling the result of such a dynamic “a lose-lose situation.”

Jackson pointed out that there “are other protests occurring around the city but the one outside the courthouse is the one that has gained the most attention” asserting that this attention is what drew so many participants and that “unlike other protests which tend to end towards the evening, the more violent protests are taking place under the cover of dark and the message is not one that is clear.”

Jackson went on to state that it is “difficult to ensure that African Americans remain included in Portland’s BLM” given the relatively small size of its African American community. She then citied a recent statement by the “Wall of Moms” where their White leaders choose to resign as an example of how “groups recognize their racial privilege and how it can place them in positions that spotlight their work” while also “ignoring that which has been done and continues to be done by Black women.”

She concluded her statement by stating that “nonviolent protests tend to fare better than violent ones in the U.S.” as “violent protests are often followed by law and order platforms of political leaders which can appeal to conservative and undecided voters.”

It appears as if there may be some unusual ideological overlap on PSU’s campus.

When asked if he agrees with Jackson’s sentiment that the movement has been hijacked, Kalin Parson, chairman of Portland State’s chapter of the College Republicans and a write-in candidate for Oregon State Senate, told Campus Reform “I do agree. You have a bunch of people with genuine concerns exercising their right to peaceful protest, and then you have these radicals come in and turn these peaceful protests violent.”

“People see these protests turn violent and then that becomes what the movement is associated with," he added.

When asked if he supports President Donald Trump’s use of federal force to quell unrest, Parson said “I believe that federal forces are justified in protecting federal property, however, I believe they should be working more with local police and government officials to de-escalate, rather than escalate, the situation. I also think arresting people without identifying themselves was very wrong and I definitely think there needs to be some more transparency.”

Parson also condemned the use of violence by rioters, stating that “I believe that violence is detrimental to the movement they claim to support. By committing acts of violence, it turns normal people off to what they are trying to accomplish. The violence and damage being caused by the rioters in Portland are reprehensible and I think it’s something that everyone should condemn.”

He went on to say “Portland is a beautiful city with so many amazing people and these rioters are making the city look horrible.”