The college president announced that the student’s speech had “no place” at the school, and the student was “immediately suspended.”

After a student group made a list of radical demands to Juniata College administration, one student sent an email to the community speaking out against the fundamental assumptions behind efforts to create race-based programs on campus. 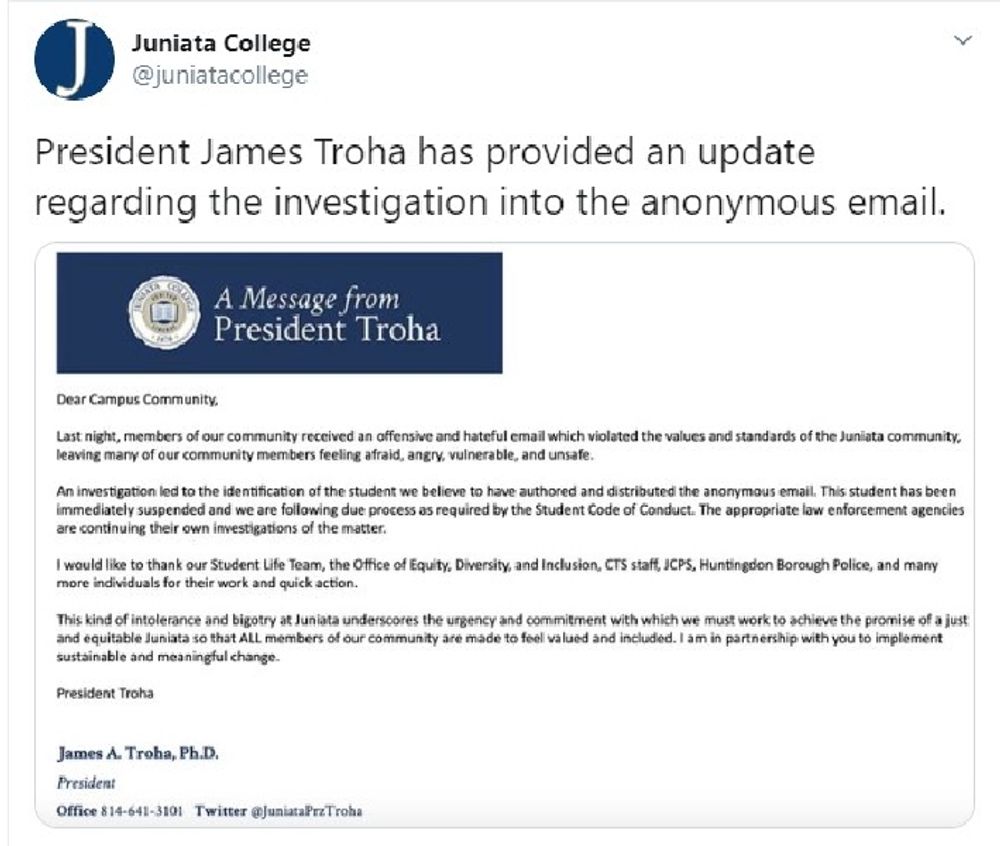 A Pennsylvania student was "immediately suspended" after sending an email criticizing demands from students of color on campus, and insisting that students’ problems “aren’t because of your skin color.”

Juniata Provost Lauren Bowen sent a message to students and alumni making them aware of the “financial pressures” that Juniata has been facing which have been “exacerbated by the pandemic.” Bowen revealed that she decided “not to reappoint several faculty for the 2020-2021 academic year” and that some programs would be suspended.

Despite these cuts, the student group Student Advocates for Universal Respect (SAUR) took issue with Juniata’s claim of being a “cohesive” campus by submitting a “Diversity Recommendations List” to the leadership of Juniata College, demanding that additional resources be made available to them.

In the 26-page open letter, SAUR demanded  that Juniata “begin and continue an institution-wide shift in all aspects of its culture which focuses on anti-Black racism” because “Black students are left to fend for themselves.”

“We lobby for a ten-year plan from the Juniata administration of how they will hold themselves accountable for change. Students, from now on, will not fight. It is the responsibility of the institution to eradicate systemic racism from our campus,” SAUR continued.

The list of demands included the creation of a Bias Response Team, the hiring of “more professors of Color” and “counselors of Color,” reinvestment in the Equity, Diversity, and Inclusion office, and the establishment of a “Vice President of Color” position

The group also demanded a new requirement that all students take “classes that teach about systemic racism and minority culture,” and the reassessment of the college’s relationship with the Huntingdon Police Department.

In response to these actions, an anonymous email was sent out to all faculty and students condemning the list of demands that SAUR had published. The school then launched an investigation, which revealed that a senior student named Colin Daly sent the email.

Daly characterized the students' demands as “unrealistic,” “loathsome,” and “utopian” in his email. He argued that SAUR was “grasping for something the world will never provide you,” adding, “No one may have ever told you this — it’s a lesson everyone needs to be taught — nobody is responsible for your well-being. Life is hard; everybody is focusing on their problems.”

“The problems you have aren’t because of your skin color. Those days are over,” Daly wrote.

“The problems a lot of you have now could derive from, just to name a few, a lack of personal responsibility, lack of growing up in a stable two-parent household, or a general disinclination for learning of the college variety,” he continued.

Daly dismissed their claims by offering a seemingly simple solution: “Some people are mean; don’t associate with them."

He went on to acknowledge that there are “incidences” of racism, but argued that America is not a “white supremacist country,” saying that the sole example of systemic racism in the country is “affirmative action.”

“Students and faculty should be on campus because they are the best candidates, not because you want to fill a quota,” Daly said in regards to the practice.

“Society has chiseled you into the people you are today, though I still hold some modicum of hope you can awaken from your stone slumbers and be real people,” Daly said about members of SAUR.

Throughout the email, Daly cites the risk of Juniata ‘s vulnerability due to financial hardship brought on by COVID-19 as one of the biggest reasons the college should not enact the demanded changes.  Daly encourages Juniata to “resist making substantial change” because it will “make our campus an elite ideological brainwashing camp.” He adds that he does not believe that institutions of higher education should be places where students are treated differently due to their “immutable characteristics.”

Later that evening, Juniata College President James Troha made an official statement on Twitter describing Daly’s words as “slurs, hateful language and imitations of violence.” He “strongly condemn[ed]” the email and said that “speech of this kind has absolutely no place at Juniata,” before announcing that the college was starting an investigation into the matter promptly.

The following day, Troha released another statement on Twitter revealing that Daly was “immediately suspended” following his identity being discovered from the anonymous email. However, Troha ensured that “due process as required by the Student Code of Conduct” is being carried out.

Students at Juniata were not satisfied with this action as a petition was started on Change.org calling for the investigation and expulsion of Daly. It has gained over 2,000 signatures.

In a statement to PennLive, Daly profusely apologized for his decision to send out the campus-wide email.

“I made the worst choice of my life Friday and in doing so deeply hurt my family and countless others, In the days since, I have listened to the voices of the Juniata community and of people I trust. I am overwhelmed at the lack of humanity, care and empathy that I now realize I expressed in my letter." Daly said.

“These conversations have made me aware of the work I have to do going forward. The person who wrote the letter is not the person I want to be. I am dedicating myself to a greater understanding of my neighbors, society and culture. I am sorry and will do better,” Daly concluded.

Daly told PennLive that he still hopes to continue his path to graduation from Juniata after the end of his suspension.

The decision depends on the outcome of his student conduct case which is set to take place this summer.

Juniata College told Campus Reform that the “institution will not (and legally cannot) comment on any active disciplinary action.”