A professor set to teach at Winthrop University this fall reportedly wrote on Facebook that she would report white teachers for posting "pro-police anti-black rhetoric" on social media.

The university is now investigating the remarks. 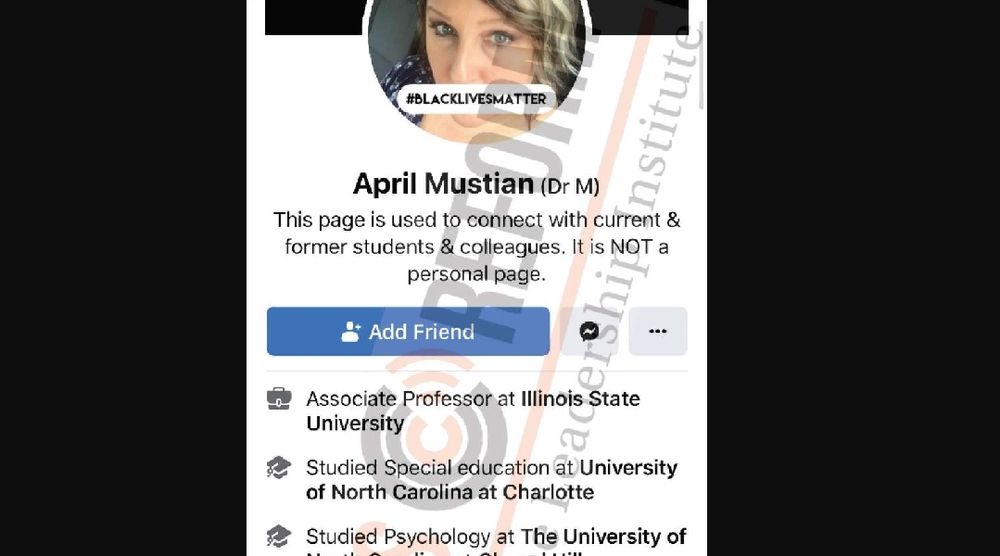 A former Illinois State University professor reportedly wrote on Facebook that she would report white teachers for posting "pro-police anti-black rhetoric" on social media by sending their bosses screenshots.

Now, Winthrop University, where she is set to begin teaching this fall, is investigating.

According to Young America's Foundation, April Mustian, who recently left Illinois State and is slated to teach at Winthrop University this fall, posted on June 26 about "white" K-12 school teachers to her now-deleted Facebook page.

“If you are a White K-12 teacher who teaches Black children, and you are on your FB posting pro-police anti-Black rhetoric, I hope and pray those are posts and beliefs you are willing to stand by in front of Black families you are supposed to also love and serve,” screenshots of Mustian's post read.

Mustian allegedly threatened to report such teachers by sending their bosses screenshots as evidence.

“I hope those are posts you are willing to stand by when district personnel get screenshots of your ignorance. This is a new day, folks. People are getting fired for being racist on social media," said Mustian. "Don’t think you are above reproach, especially in this day and age when opportunities to unlearn racism and bias are at your fingertips. And, if your first thought is to delete me because of this post, chances are I already have some screenshots.”

Soon after this post, Mustian deleted her Facebook account. Her bio clarified that her page was not a personal one, but one for connecting with students and coworkers.

“This page is used to connect with former students and colleagues. It is NOT a personal page,” her now-deleted bio read, according to a screenshot obtained by Campus Reform.

Mustian recently served as an associate professor at Illinois State University, specializing in special education. She is slated to start at Winthrop University for the incoming 2020-21 school year, according to school documents.

Winthrop University spokeswoman Judy Longshaw told Campus Reform that the University is in support of their school's police department, and vowed to investigate concerns raised around their employees when they arise.

“As a public institution Winthrop respects the First Amendment and protected speech rights for public employees.  When we receive concerns regarding an employee’s behavior that might misrepresent the views of Winthrop University, or violate the university’s policies, we follow our regular processes to investigate.  Winthrop will investigate the concerns raised and take appropriate action based on the results of the investigation,” she added.

The university posted to its Facebook page that it had "received a great deal of input regarding the hiring of a particular employee," further vowing to investigate.

"In the meantime, we want to be clear that we assertively affirm that Winthrop University respects, supports, and appreciates all law enforcement officers including those on our campus and those in the local community, our state, and the nation. The high level of regard extends to other first responders as well," the university said.

“This professor is encouraging public schools to engage in viewpoint discrimination and violate the 1A by firing teachers for their private, off-campus, political speech,” Neily said. “She should know better, since she works at a public university that is also bound by the 1A!”

Neily added that this is yet another example of the "ugly phenomena" of cancel culture.

"The fact that this kind of negative behavior is being modeled by a teacher and role model to students is concerning. As an authority figure, wouldn’t it be better to attempt to persuade former students and colleagues on these topics, rather than trying to get them fired?”

Campus Reform reached out to Mustian but did not receive a response in time for publication.