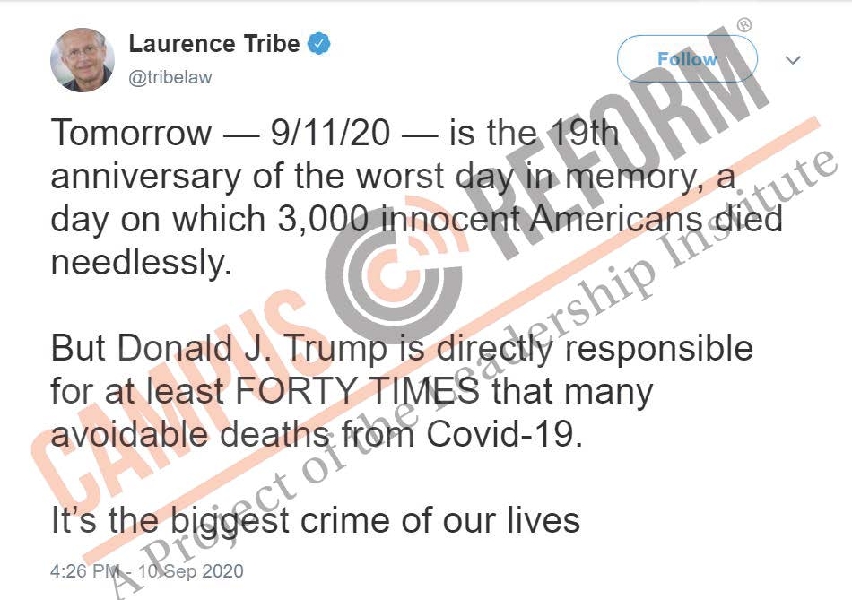 Harvard Law professor emeritus Laurence Tribe used the 19th anniversary of the September 11 attacks to say that President Donald Trump is "directly responsible" for the coronavirus death toll, which stands at more than 180,000 Americans.

“Tomorrow — 9/11/20 — is the 19th anniversary of the worst day in memory, a day on which 3,000 innocent Americans died needlessly,” Tribe tweeted Thursday night from his personal Twitter account, which is linked on his official university bio. “But Donald J. Trump is directly responsible for at least FORTY TIMES that many avoidable deaths from Covid-19.”

"Donald J. Trump is directly responsible for at least FORTY TIMES that many avoidable deaths from Covid-19."

“It’s the biggest crime of our lives,” he said.

In a statement to Campus Reform on Friday, Tribe said, "The tweet to which you refer says he is 'directly responsible for at least forty times that many avoidable deaths from Covid-19.' That’s 40 x 3,000 = 120,000 out of the documented American Covid-19 death toll of at least 192,000. I based that claim on the many studies showing that, had the United States response been led responsibly from the time the president was privately acknowledging the danger we faced, with rapid invocation of the Defense Production Act and the kind of steps taken by comparable nations under the circumstances, including rapid deployment of testing and tracing and strong pressure to socially distance and wear masks (rather than messages discouraging both and downplaying the danger of this virus), our death toll would have been at least 35% lower than it has been."

"Because 35% of 192,000 is 67,200, responsible action by President Trump and his administration would have reduced the number of fatalities by at least 124,800. So my figure of 120,000 was a very conservative estimate of how many Americans died needlessly as a direct result of how President Trump chose to mislead the public and opted not to take the steps needed to contain the spread of the virus, demonstrably for the purpose of not spooking the stock market and thus, indirectly, not reducing what he saw as his chances of reelection," Tribe explained.

The comment came just days after audio surfaced of Trump saying in an interview with journalist Bob Woodward of the coronavirus pandemic, "I wanted to always play it down. I still like playing it down, because I don’t want to create a panic." Trump has since defended that decision, saying, "I love our country. And I don’t want people to be frightened. We have to have leadership. We have to show leadership."

“In the fog of war, it’s easy to lose track of what counts,” said Tribe. “Whether Soleimani posed an 'imminent' threat that killing him would assuredly end isn’t just a debate over labels. It’s the difference btw [between] self-defense to protect Americans and murder to stave off Trump’s impeachment.”

Tribe said that the situation was "increasingly looking like summary execution without trial" by the United States. 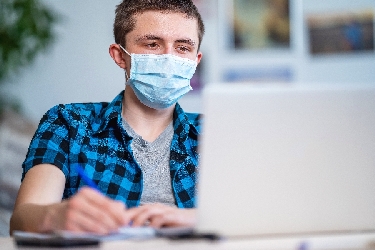 CSU announces it will STILL be online in spring 2021, citing 'dark clouds' of COVID Shares 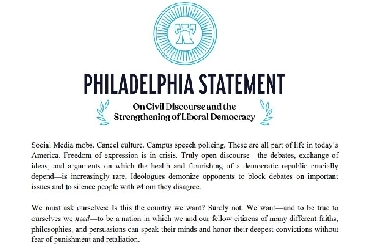 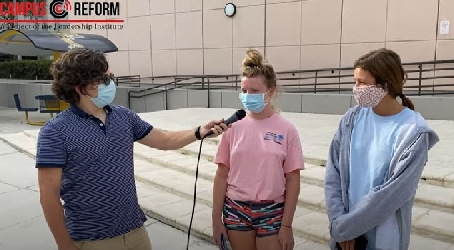 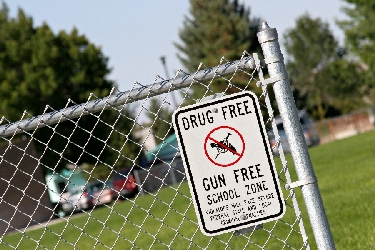