The school declined to comment and the student maintains she did nothing wrong.

According to emails obtained exclusively by Campus Reform, the ASU station manager who came under fire for her Jacob Blake tweet is now officially out of a job. 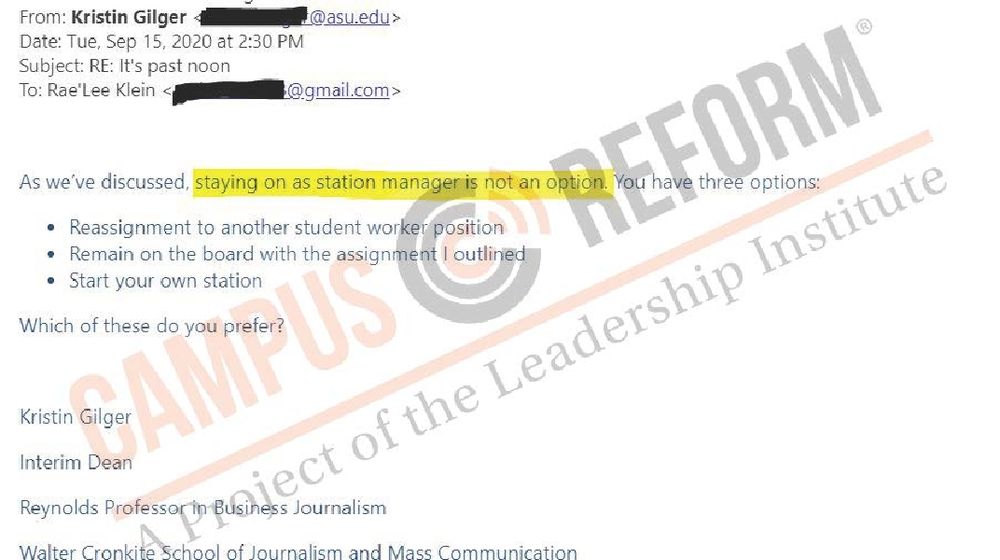 According to emails obtained exclusively by Campus Reform, the Arizona State University student who faced backlash over her tweet about Jacob Blake has officially been removed from her position as The Blaze radio station manager at the Walter Cronkite School of Journalism.

Interim dean and Reynolds Professor in Business Journalism at the Walter Cronkite School of Journalism Kristin Gilger sent The Blaze station manager Rae'Lee Klein an email on Tuesday, informing Klein of her options.

That email came about two weeks after the station's six directors urged Klein's removal from her station manager position over a tweet in which she shared an article about Jacob Blake, the Black man who was shot by police in Kenosha, Wisconsin, and his arrest warrant for sexual assault, “Always more to the story, folks. Please read this article to get the background of Jacob Blake’s warrant. You’ll be quite disgusted.”

Klein's tweet prompted widespread calls for her termination, resulting in Gilger giving Klein three options: "Reassignment to another student worker position," "Remain on the board with the assignment I outlined," or "start your own station." Klein told Campus Reform that the "assignment" to which Gilger alluded "would be a new board position where I work on diversity and different issues."

Roughly one hour later, Klein responded to Gilger, writing, "After long consideration about the situation, I am declining to willingly step down from my position as Station Manager. I truly believe I did nothing wrong that is worthy of removal. No one has communicated to me any law, written standard, or rule I violated with my actions. I shared a factual argument, and although I shared an opinion, that I was disgusted by the sexual assault of a woman, I have done nothing more erroneous than my peers."

"I was told to tweet as part of my assignment at Cronkite News, and as a student, am learning how to do so to standard. The issue remains, many students at the school don't know what that standard is. I stand by the belief I am being treated unfairly, and the school and faculty advisers have failed to protect me and my rights as a student and individual," she added.

Gilger replied later that afternoon, reiterating to Klein that "staying on as station manager is not an option. You have three options."

"Which of these do you prefer?" Gilger asked.

Campus Reform reached out to Gilger to ask which policy or rule Klein violated to constitute removal from her job. Gilger did not respond, but Cronkite School Director of Media Relations Karen Bordeleau told Campus Reform in an email just minutes later, "We have no additional statement regarding The Blaze."

Klein pointed Campus Reform to a "stationwide meeting" scheduled for Wednesday night, which the station said was intended for  "discussing programming with all of our new and returning members!"

Klein said she was not initially invited to attend the meeting but did receive an invitation about 15 minutes before it was set to begin.