The senate body of the Arizona State University Undergraduate Student Government passed a resolution to defund the campus police force by a vote of 13-4-1.

Senate Resolution 4, sponsored by the Black African Coalition and El Concilio, demands the university “begin the process of disarming, demilitarizing, and defunding the ASU police department." The resolution requests that the administration decrease the number of ASU police officers from 87 to 70, “substantially” reduce the budget allocated to the ASU Police Department and shift funds to “community health," and suspend the use of firearms.

Moreover, the resolution demands the salaries of the 17 police officers be eliminated and used as hourly pay for employees of the multicultural center on campus. In a supporting document, authors of the legislation claim there are “several warning signs that suggest there is potential for police violence at ASU."

In addition, the senate body also approved Senate Resolution 2, which seeks to “transition instruction online indefinitely due to COVID-19."

The authors of the resolution claim that affording students the option to attend in-person classes absolves the university of any responsibility for the health and safety of students. It also asks that the university provide low-income students with free Wi-Fi hotspots and laptops in the event the university chooses to transition to remote instruction.

Following the decision to defund the police, the Arizona State University College Republicans issued a statement, saying that the student government has "no power" to make these decisions.

We #BackTheBlue and stand resolutely with men and women in uniform as they weather these radical attacks & face down neo-Marxist fairytales. #ASUGOP pic.twitter.com/sTFJDJjDVj

“Let’s be clear: the Undergraduate Student Government has now power to take these actions -- they are entirely unactionable. But the radicalism displayed, that which has infiltrated our university’s student government, is troubling,” the statement read.

“We continue to Back the Blue and stand with all men and women in uniform who serve their communities everyday,” the statement continued, “We remain resolute in our commitment to supporting the police as they keep our communities safe.”

Members of the senate body went on Twitter to share their objections to the ASU College Republicans' statement.

“If you say back the blue then you might as well say you support the lynching of BIPOC students,” ASU student government senator Alexia Isais said in a tweet.

and you're different from CRU,,, how? If you say back the blue might as well say you support the lynching of BIPOC students. https://t.co/NPjG6NvBmz 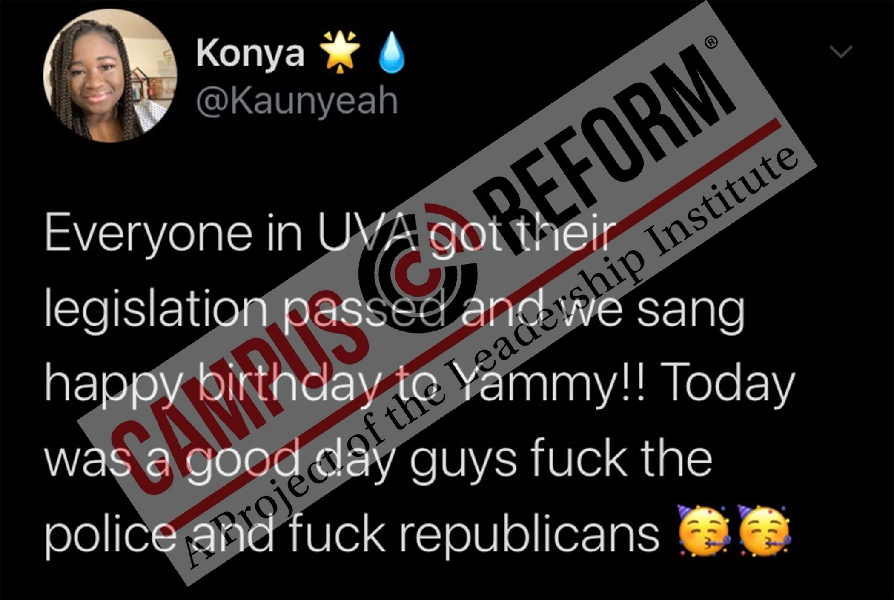 In an email to the State Press, an ASU Police Department spokesperson said “reducing the capacity of a police department that is here solely to serve and protect the campus community, will only make the campus less safe.”

ASU President Michael Crow later issued a statement committing to 25 actions, one of which stated, including "additional racial sensitivity training for ASU police officers" as well as to "further supplement the ASU police force with enhanced services to meet the needs of students, faculty, staff, and the public..."

Campus Reform reached out to Isais and Saidu but did not hear back in time for publication.