The University of Missouri placed a $20,000 acrylic case over Thomas Jefferson’s original tombstone over concerns about vandalism.

Over the summer, a statue of Jefferson at the university was the target of vandalism, and more than 3,500 people petitioned for its removal. 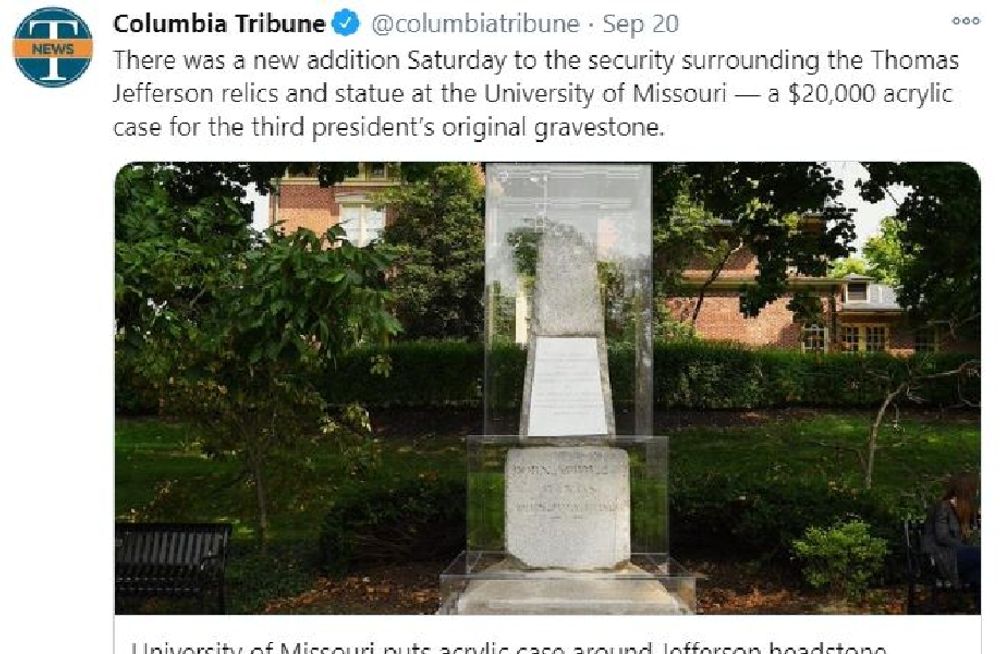 Due to concerns about vandalism, the University of Missouri installed a $20,000 acrylic case to guard Thomas Jefferson’s original headstone from attack.

“This is Jefferson’s original tombstone that was entrusted to the university and we have a responsibility to insure [sic] that it is preserved appropriately,” University of Missouri spokesman Christian Basi said, according to the Associated Press.

Over the summer, a separate statue of Jefferson on campus was the target of vandalism.

Thomas Jefferson’s original headstone at Monticello, Jefferson’s estate and resting place in Virginia, was replaced in 1883 and given to the university.  The first headstone was constructed in 1833, but was vandalized by Monticello visitors seeking to keep pieces as souvenirs.

In 1836, the headstone was moved to the house at Monticello in order to protect it from further damage. Congress funded the creation of a new headstone in 1882, which was erected the next year. The original headstone was given to the University of Missouri.

Campus Reform previously reported on University of Missouri students’ demands for the removal of a separate Thomas Jefferson statue.

More than 3,500 students signed a petition asserting that “Mizzou has no room for a racist slave owner on our campus, in the Quad, where thousands of Black students pass by everyday, forced to deal with imagery of the past in the future where we should be promoting equality, diversity and inclusion.”

Campus Reform reached out to the University of Missouri for comment but did not receive a response in time for publication.