Campus Reform | Ethics prof pictured in 'ANTIFASCIST' shirt: I want 'world to burn' until 'last cop' is 'strangled' with 'intestines of the last capitalist'

Ethics prof pictured in 'ANTIFASCIST' shirt: I want 'world to burn' until 'last cop' is 'strangled' with 'intestines of the last capitalist'

A professor at Midwestern State University is under fire for writing on Facebook that he wishes every cop, capitalist, and politician would be "strangled."

The university defended the professor's right to free speech but said it has sought the counsel of the Texas attorney general. 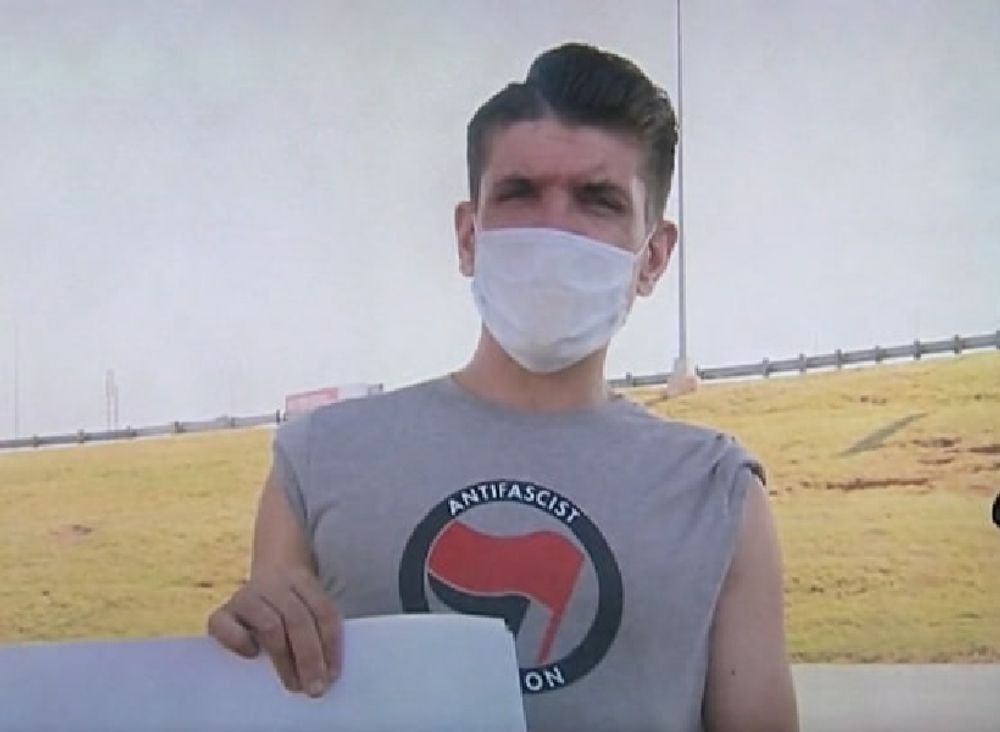 A professor at Midwestern State University in Texas is under fire for a Facebook post in which he expressed a desire for police to die from strangulation with the "intestines of the last capitalist."

According to KFDX, the professor, Nathan Jun, posted the comment in late September, appearing to have inspiration from French philosopher Denis Diderot, who said that “Men will never be free until the last king is strangled with the entrails of the last priest.” According to his faculty bio, Nun teaches "Asian Philosophy and Religion," "Philosophy of Race and Racism," and "Ethics."

Although Jun’s Facebook post has received significant backlash, he stated this isn’t the first time that people have been upset about his posts on social media. After the death of George Floyd, Jun stated that people became outraged at his posts on Facebook as well as his profile picture showing, “Abolish the Police.” Jun stated that MSU didn't do enough to publicly show support for his right to freedom of speech, and even started a GoFundMe page to help pay attorney fees to challenge the university.

“Throughout all of this, my employer exhibited an utterly callous disregard for my safety and well-being, making no effort whatsoever to defend me (either privately or publicly) or to protect my rights more generally.” Jun states on the GoFundMe page. He continues to say the University didn’t pay attention to a letter of support that had 500 signatures. “Instead, the president of the university administration eventually broke her prolonged radio silence by sending me a terse email alleging that I had "violated the university's academic freedom and responsibility policy" and implicitly threatening me with reprisal if I continued to speak out publicly on issues of race and racism.”

Jun stated that he recruited the help of the Foundation for Individual Rights for Education (FIRE), who helped him get an attorney and sent a letter to the president of the university stating that it had violated his First Amendment rights. FIRE’s lengthy letter to Midwestern University President Suzanne Shipley stated, in part, “Jun’s expression, made as a private citizen on matters of public concern, falls well within the protection of the First Amendment. To the extent that MSU interprets its policy to prohibit that expression, that policy is in conflict with—and subordinate to—the First Amendment.”

A week later, Jun’s attorney, J.T. Morris also sent a letter to Shipley and the email she sent to him about violating the University’s policy. The letter stated in part, “MSU should take the opportunity to defend Professor Jun’s academic and expressive freedom—as well as the freedoms of all its faculty—and issue a statement condemning the harassment and threats Professor Jun endured.”

“They’ve had plenty of opportunities to get rid of me over the past 12 years. They’ve never attempted to do so.” Jun stated regarding the latest Facebook post. He also claimed that he has received death threats, and that his home has been vandalized.

"The results are always the same. People are calling for my death or for my termination or for my entire family to be killed or whatever," he told KFDX, adding that he had to stay at a hotel for his own safety.

Amid the backlash, MSU publicly acknowledged his right to freedom of speech.

“To its credit, my employer, Midwestern State University, has repeatedly affirmed that neither I nor any other faculty member will be punished or retaliated against—let alone terminated—for exercising our Constitutional rights to free speech," Jun said.

MSU’s statement said that it supports the professor's right to free speech, while characterizing his comments as "offensive."

“Occasionally individuals will express opinions that may be offensive and even shocking, but are nonetheless entitled to First Amendment protection. When our faculty members speak or write as citizens within the confines of the law, they are free from institutional censorship or discipline," the university said.

"That being said, please know this: we have conferred with and are being capably advised by the office of the Attorney General of the State of Texas. We are committed to monitoring this situation with their guidance and will take decisive action if a line is crossed beyond that of speech protected by the First Amendment. Additionally, no students will be required to enroll in or complete Professor Jun’s courses. Alternatives will be provided even now if the student requests them," Shipley added.

Jun declined to comment on the story, and Campus Reform did not receive a response from MSU in time for publication.