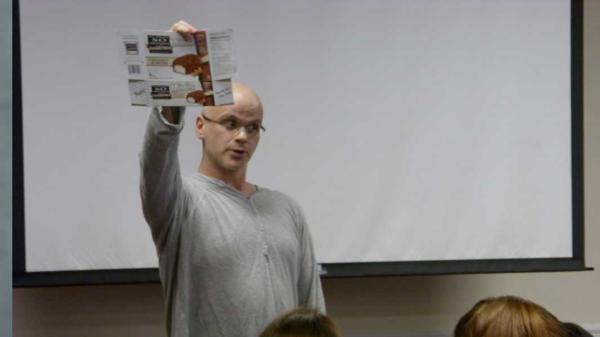 In an Eastern Michigan University (EMU) Sociology 101 class, Yourofsky accused students of bestiality for eating meat, called circuses "slave ships," and equated the dairy and meat industries to the Holocaust.

“You pay somebody else to sexually molest a cow and squeeze their nipples for you?"

“Is bestiality weird to you?" he asked. "Doing sexual things with animals? Because I used to think everybody thought so, but not even close, my meat, cheese, and egg-loving friends, because you engage in carnivorous bestiality on a daily basis,” he told the students.

“You pay somebody else to sexually molest a cow and squeeze their nipples for you? OK, you guys are fucking obsessed with hen asses and cow tits," he said to students. “[O]nce a year, every cow on every dairy farm is raped to impregnate her, a long steel device shoved in her vagina.”

In an interview in 2006, Yourofsky said that those who wore fur deserved to be brutally raped.

During his speech, Yourofsky — a Jew himself — repeatedly equated eating meat with the Holocaust.

“Imagine yourself confined in a concentration camp, on your way to a slaughterhouse, so someone could slice your throat and cut you up into pieces, you would understand why the psychotic addiction to meat, cheese, milk and eggs must be abolished,” he said.

“There is a holocaust taking place right now," he added. "It is the world’s largest and longest-running holocaust.”

Yourofsky said that he became a vegan after an experience at the circus.

“One day after seeing animals backstage at a circus, chained up and caged up, I not only realized that I was witnessing a slave ship, I realized I was a hypocrite, a bigot, a species-ist. Like a racist believes that their race is more important and more special than all the other races, a species-ist believes that humans are more special and more important than all the animals, and therefore have the right to modify, enslave, and kill any species they choose,” he said.

He also told students that by eating meat, they were "intentionally causing pain and suffering, and polluting [their] soul[s] with the blood of innocent animals.”

Yourofsky has been classified as an "international terrorist," and has been banned by five countries, including Canada and Britain.

The professor who had Yourofsky speak may lose his sociology class over the invitation, the student who recorded the speech speculated to Campus Reform in an email on Wednesday.

“He said to the class today that this may be the last time he is there,” student Pat Sudds said in the email. “I do not know what that means but he indicated that he got emails from EMU's President, provost, the department head and a few others in regards to his choice of speaker."

Sudds said he would not know whether the professor would in fact be banned until he has the class again on Monday.

EMU spokesman Geoff Larcom told Campus Reform in an interview on Thursday that Yourofsky gave the speech in two other classes as well, and that only one student had complained. He said the school is investigating that complaint now.

"Any time a student complains we would engage that student," he said.