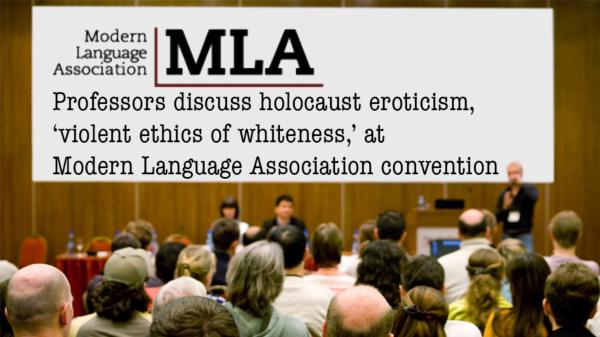 "[R]acially themed discussions include “Beyond Huck and Pudd’nhead: Mark Twain and Race,” which will investigate “Constructing a Legacy of Whiteness in The Autobiography of Mark Twain.”

“[T]he battle for the woman’s body becomes the logical site for representing and indicting Nazi and other racialist ideologies as desperate struggles for masculinist power,” according to a description of the panel.

The MLA, which is is most notable for their widely used grammatical style guide, seeks to provide "opportunities for its members to share their scholarly findings and teaching experiences with colleagues and to discuss trends in the academy.”

The convention will run through Sunday, and a full program can be viewed online at their website.

Special focus will be given to the “Violent Ethics of Whiteness,” and “Teaching Racist Texts” which spotlights “engaging students in frank conversations about the racism inherent in much of American literature.”

Such racially themed discussions include “Beyond Huck and Pudd’nhead: Mark Twain and Race,” which will investigate “Constructing a Legacy of Whiteness in The Autobiography of Mark Twain,” “'Where You Gon Be Standin?': Spatial Logics, Civil Rights Discourse, and the Poetics of Black Lesbian Identity,” and “Interracial, Cross-Species, Cross Gender: The Political Value of Queer Coalition.”

One discussion panel will look at racial themes in pop culture, including "The Minstrel Closet: Masked Vulnerabilities and the Postracial in Tropic Thunder," and “(Post) Racial Vulnerability and Feelings of Blackness in Grey’s Anatomy.”

The full discussion on the popular television show Girls, titled “Girls and the F Word: Twenty-First-Century Representations of Women's Lives” will have three sessions discussing “The Politics of Dressing and Nakedness,” dating, and “Popular Music and Issues of Identity” in the show.

Another popular discussion topic is queer themes in literature, including the panels "Lesbian Cowboys: Queering the Wild West through Blood Memory and Literary Activism,” “Is everything queer?,” “Between ‘Gay’ and ‘Queer’,” and “Wild, Queer, Vulnerable.”

Contemporary political issues will also be discussed at the convention, including “Beards and Breasts: The Performative Protest Politics of La Barbe and Femen,” and “The Literary Histories of Barack Obama's Dreams from My Father.”

The discussion topic “Literature and Life after Capitalism: Socialism, Barbarism, Communism, or Just More Capitalism?” will feature a “roundtable on literature, anti-capitalist activism, and projects of the future.”

MLA representatives did not return a phone call request for comment by Campus Reform in time for publication.