College campaigns against offensive language such as ‘derp,’ ‘wuss,’ and ‘you guys’ 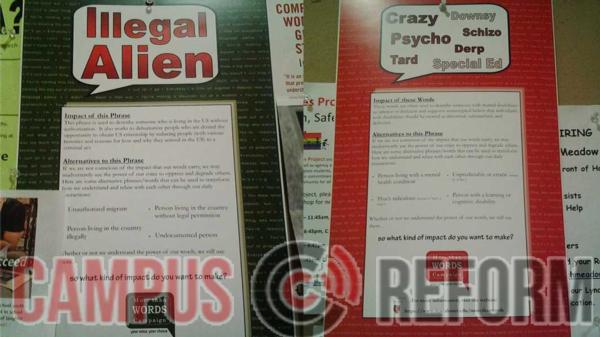 A Minnesota college has launched a campaign to warn students about the “oppressive impact” of offensive language such as “wuss” and “you guys.”

The More Than Words: Inclusive Language Campaign was created by Macalester College's Department of Multicultural Life in order to "raise awareness about the importance of using inclusive language." The campaign includes a series of YouTube videos and posters around campus.

“I don’t consciously do it, but I’ll say ‘You guys!’ or ‘We should do something together, guys!’ and I don’t even consciously...like, usually I'm addressing a group of all girls,” a Macalester College student said in a video in August.

“I joke around with my friends like ‘Don’t be a wuss, don’t be a girl,’ come on just do this,” another student said. “I never really took the time to think about what that meant, and how loaded that phrase was.”

Though there initially were only a handful of posters instructing students not to use certain words, they quickly multiplied, Macalester senior Daniel Surman told Campus Reform in an interview Monday.

“The first wave was [words] like 'gay,' 'girl,' 'retarded',” Surman said. “Then they had a second wave where suddenly the posters increased in number remarkably … that showed all of these other words that weren’t included before.”

The posters instruct students to avoid words such as “crazy” or “derp” and replace them with "person with a mental health condition" or "person with a learning or cognitive disability.”

“And that’s when people started being like, ‘is this seriously happening?” Surman said.

The campaign’s website lists even more words, such as “lame,” which have an “oppressive impact in our society.” Other posters instruct students not to use the phrase "illegal alien" or "handicapped."

The college also released multiple videos, one of which featured comments from a professor.

"Our culture is heterosexist, it's racist, it's patriarchal. It's transphobic, homophobic, ageist, ableist,” SooJin Pate, a Visiting Assistant Professor of American Studies, said in another video.

"Our language... not only reflects that culture but also creates it," she continued.

This story was obtained through the Campus Reform tip line: Contact@CampusReform.org.