School official: Allowing guns on campus could ‘easily trigger’ stressed students to shoot each other 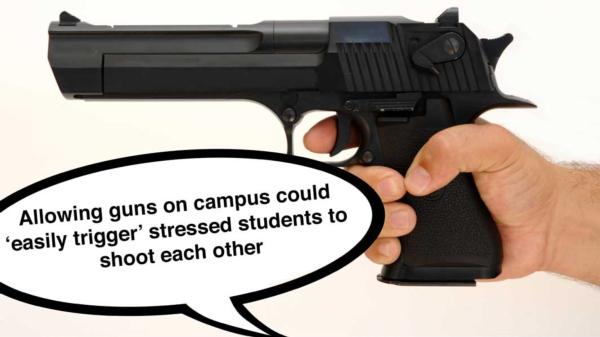 A university public safety director said he opposes a push to allow guns on campus because it could “easily trigger” students to shoot each other when they are stressed.

Student groups at University of Minnesota are advocating for a change in policy to allow guns on the campuses in order to protect students and staff. However, the public safety director at Minnesota State University Moorhead, which follows guidelines set by the Minnesota State Colleges and Universities system, said the idea is dangerous.

“Obviously in a school environment where you have a lot of people, you have a lot of stress and pressures, it could easily trigger somebody to get upset if they had a weapon on them, with them to use that," Greg Lemke said in an interview with Valley News Live, a local news source.

The “Allow Campus Carry” event began today at University of Minnesota -Twin Cities and is scheduled to run through Thursday. Its sponsors include the university’s chapter of Young Americans for Liberty (YAL), the Minnesota College Republicans, and Collegians for a Constructive Tomorrow.

The chair of the school’s YAL chapter told Campus Reform that this statement was offensive.

“We definitely have more faith in our peers than to assume that in a school environment they would use a weapon for bad,” Brittany Johnson said in an interview on Tuesday.

“I don’t agree with his logic,” she continued. “I don’t think there’s much logic at all, saying students wouldn’t be able to control themselves.”

A writer for The Minnesota Republic, another of the initiative’s sponsors, had similar sentiments.

“I feel like that is just a ridiculous thing to say,” Allison Maass told Campus Reform in an interview on Tuesday. “The people who legally own guns aren’t carrying guns to go shoot people, they’re doing this to protect themselves,” she added.