University calls the amount of white people on campus a ‘failure,’ asks for ideas on how to have fewer 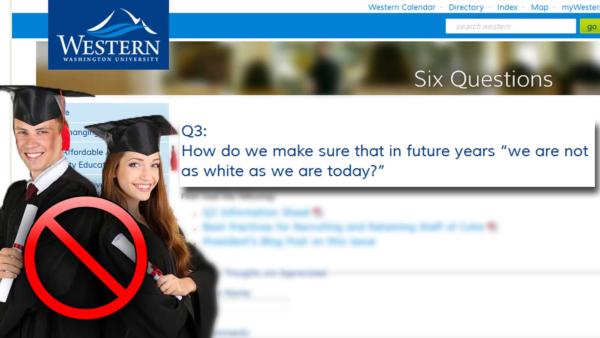 A school-wide questionnaire at Western Washington University (WWU) asked the community “How do we make sure that in future years ‘we are not as white as we are today?’”

The question, released through the communications and marketing department's daily newsletter Western Today, comes on the heels of admonishments given in multiple convocation addresses by WWU President Bruce Shepard for the university’s “failure” to be less white.

“In the decades ahead, should we be as white as we are today, we will be relentlessly driven toward mediocrity; or, become a sad shadow of our current self."

“Every year, from this stage and at this time, you have heard me say that, if in decades ahead, we are as white as we are today, we will have failed as university,” Shepard said in the 2012 speech.

And in a recent blog post on WWU’s website, Shepard echoes these sentiments, saying those who do not agree “have not thought through the implications of what is ahead for us or, more perniciously, assume we can continue unchanged.”

“In the decades ahead, should we be as white as we are today, we will be relentlessly driven toward mediocrity; or, become a sad shadow of our current self,” he wrote.

WATCH: President Bruce Shepard base success on the color of the students and not the content of the curriculum

The six question survey, inspired by Shepard, is meant to combat a recent decline in Washington high school graduation numbers, the pool from which the university draws 90 percent of its students.

The university has already replaced standard performance reviews with sensitivity training and hosts workshops to better serve undocumented students. WWU also provides literature on how to better “recruit and retain faculty and staff of color.”

Campus Reform talked briefly to a spokesperson from the university who was hesitant to offer clarification to the controversial questionnaire.