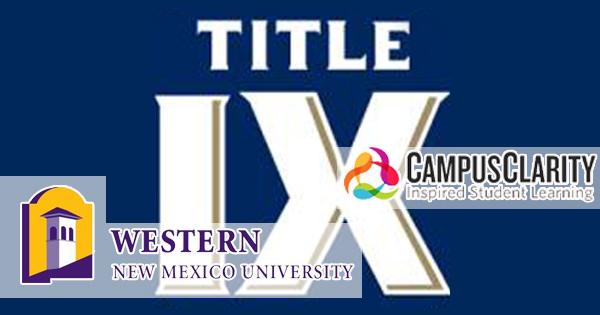 WNMU is one of 190 schools that has partnered with Campus Clarity, a company that sells training programs on sexual assault and substance abuse prevention. Campus Reform previously reported that one training program, called “Think About It,” received national backlash after students and faculty at Clemson University condemned its personal and invasive questions about their sex lives.

According to WNMU officials, the individual data in the training program will not be collected and stored by the university but will use the data in its entirety to determine what types of support services the school should implement on campus.

Abe Villarreal, director of communications at WNMU, told Campus Reform that while the university is still actually reviewing the program and vetting some parts of the questionnaire, students have already helped to pay for the program through orientation fees.

“When all of the students registered for orientation, we did list [Campus Clarity training] there as a program that is being covered by their fees for orientation,” Villarreal told Campus Reform in an interview.

Villarreal said he was not sure how much of each students’ orientation fee went to Campus Clarity’s program, but did say the school has signed a three-year contract with the company which costs $11,000. Villarreal told Campus Reform that UNMU has already paid the first payment of $4,000 to Campus Clarity for this year.

Other than listing Campus Clarity as something students’ orientation fees helped to cover, Villarreal said students have not yet been notified of the training program even though the school is required to do so by October.

“Once we implement it, then yeah we’re going to do a full communication with them on why we’re using the program and how it’s going to benefit them,” he said.

And while Villarreal said that WNMU is still in the process of vetting the program, the school isn’t reviewing any other training.

As Watchdog.org originally reported, WNMU is currently reviewing the questionnaire portion of the training program, but Villarreal told Campus Reform that the school has been vetting the program since before Clemson received national backlash.

Villarreal said that the school still plans to require all new and incoming students to take the program this academic year as “it’s still early on in the year.”

“We still plan to administer the program knowing that we’re allowed to ask the questions that we choose,” Villarreal said.

According to WNMU officials, the individual data in the training program will not be collected and stored by the university but will use the data in its entirety to determine what types of support services the school should implement on campus.

Earlier in September, students and faculty at Clemson University decried the training program as it required students to submit invasive details on their sexual history and drinking habits or face disciplinary action by the university. Within five hours of Campus Reform’s initial reporting, Clemson suspended the mandatory training to review the questions.