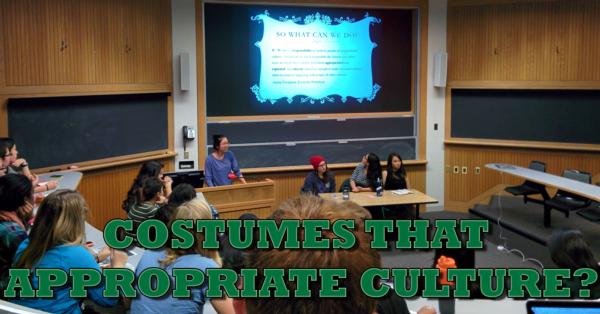 Students at Dartmouth received a lesson in cultural appropriation a few days ahead of Halloween.

According to The Dartmouth Review, several cultural student groups hosted a panel Monday to explain the inherent difference between appreciation of a culture and simply mimicking cultural images. The panel also discussed the appropriateness of culturally-themed Halloween costumes.

"I really think that any costume created without an intent to offend should be fine."

“I thought that the event was mostly unproductive hand-wringing,” Brian Chen, the sophomore Review staffer who attended the event, told Campus Reform. “I'd say that more than half the time in the approximately hour-and-a-half event was spent trying to pinpoint a litmus test or line in the sand for determining what would be considered cultural appropriation.”

Chen said the panel sought to define cultural appropriations as taking bits and pieces of culture from a minority without really debating the idea as a whole.

As for Halloween costumes, the panel suggested one should either attempt to explain to a person why their costume might be culturally appropriative or simply report the offensive costume to someone else.

However, Chen said that cultural appropriation isn’t really a top priority for most college students when picking out their outfits.

“I really think that any costume created without an intent to offend should be fine,” he said. “Only a costume with a real malicious intent should be considered ‘offensive.’ Halloween is supposed to be an exciting and fun time, and college students should simply exercise some degree of common sense and be judicious overall without giving any attention to the politically correct cries about cultural appropriation.”

The Afro-American Society, Dartmouth Spectra, the Inter-Community Council, La Alianza Latina, Native Americans at Dartmouth, and the Pan Asian Council all hosted Monday’s event together. The three panelists were of American Indian descent, Korean descent, and Mexican and Colombian descent, according to the Review.

During the discussion one student asked why it is acceptable for people in Japan to wear jeans whereas Americans would be culturally appropriating if they donned kimonos. Another student expressed frustration with the Dartmouth administration for not allowing his fraternity to host a Canadian-themed event even though the event was planned by Canadians.

“In the end, people who are offended do not have a right to speak for an entire racial or ethnic group,” Chen said. “I am of a Chinese background, and I was absolutely not offended at the things that were cited as appropriating Chinese culture at the panel event.”