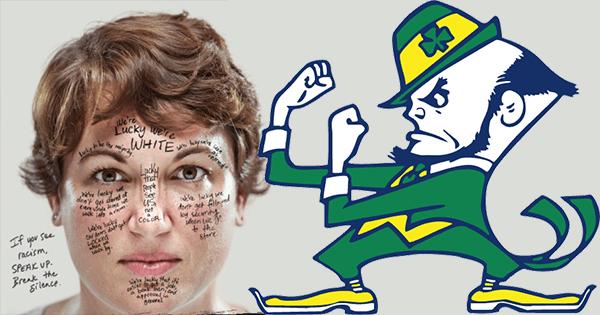 The University of Notre Dame will offer a white privilege seminar for the first time for credit next semester and bus students to an annual White Privilege Conference in Kentucky.

Ten students who make it through the application and interview process will be accepted into the six-week seminar sociology class, “White Privilege Seminar: An Introduction to the Intersections of Privilege.” The students will also attend the White Privilege Conference held in Louisville, Ky., in March as part of UND’s Gender Relations Center and Multicultural Student Programs and Services’ “student delegation.”

The application, obtained by Campus Reform, asked students to define white privilege, privilege in general, and identify their own privileges.

“The goal for each participant is personal transformation: to leave the class and conference more aware of injustices and be better equipped with tools to disrupt personal, institutional and worldwide systems of oppression,” the course description reads. “The nature of living in contemporary culture indicates that people consciously and unconsciously simultaneously participate in and are affected by systems of oppression; however, since these behaviors can be learned, they can also be unlearned.”

The application, obtained by Campus Reform, asked students to define white privilege, privilege in general, and identify their own privileges.

“Students accepted into the seminar will also be provided with free registration, travel, and lodging for the conference. Students will only need to pay for the meals that are not covered by the White Privilege Conference and “any other incidentals or purchases you would like to make during the trip,” the seminar description states.

According to the White Privilege Conference website, attendees will discuss “issues of privilege including: race, gender, sexuality, class, disability, etc.—the ways we all experience some form of privilege, and how we’re all affected by that privilege.”

“[A] fault that I find in this is that the University is financially supporting this agenda by providing funding for the [students] to attend the White Privilege Conference,” Mark Gianfalla, a student at UND told Campus Reform. “After researching this conference, anyone would be able to tell that it is far from academic [...] This isn’t multicultural; it’s an opportunity to bias students towards the shaming of one culture and ethnicity.”

According to Iris Outlaw, director of UND’s Multicultural Student Services and Programs, while this is the first time the course is offered for credit, graduate students organized a similar seminar and conference trip last year that students could participate in during their free time.

Outlaw, who is one of three professors who will lead the class discussions in the seminar, said that one student who participated in the seminar last year is retaking it for credit and a chance to go to the conference again next semester.

Outlaw also said that while the seminar name includes white privilege—due to the name of the conference—the class will take a look at a variety of other privileges such as gender and disabilities.

“This is not going to be like a white bashing or anything like that,” Outlaw said. “It’s just to help people understand the basis of privilege as well because we all have different privileges depending on who we are.”

The conference, held March 11-14, is during UND’s spring break. Students will be transported to Kentucky on March 8 for a “1.5 day pre-conference immersion experience.” The seminar will only include two post-conference two-hour classes in March before it’s completed.

While this year’s conference in Louisville, Ky., is less than 300 miles away from UND, the conference location changes each year. Outlaw said she plans to continue the seminar in the coming years.

Outlaw confirmed to Campus Reform that the cost of the conference registration and travel is taken care of by UND, and the 10 students will not have to pay any additional fee to take the seminar.

The seminar can count for credit in sociology or Africana studies, according to Outlaw.

UND officials did not respond to a request for comment from Campus Reform on how the money for the conference is provided.