Profs say women, black students should get to speak first in college classrooms 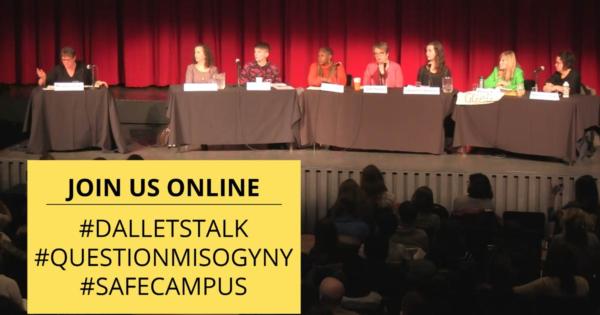 To combat supposed misogyny and racism on college campuses, a recent panel of professors and “gender justice” warriors said women and black students should get to speak first in class.

On the heels of a scandal involving male Dalhousie University dentistry students making sexually charged comments on Facebook about their female peers, the Canadian university’s Student Union and Gender and Women’s Studies Program co-hosted a forum on misogyny titled “Transforming our campus and strengthening our community.”

During the forum—composed of Dalhousie professors and representatives from local gender justice and sexual assault resource centers—one panelist suggested calling on women first during classroom discussions to boost female participation.

“I do think, in general, there are a lot of studies that indicate women, girls are socialized not to speak first… And so to make a conscious rule, a deliberate rule that is explicit, that ‘no, men are not allowed to speak first,’ is certainly a strong way of addressing that issue…” said Jacqueline Warwick, a professor of musicology and former coordinator of the Gender and Women’s Studies Programs at Dalhousie.

Jude Ashburn, who identifies as a “non-binary trans person” and serves as an outreach coordinator at a local gender and sexual resource center, told UNews after the panel that she thinks black students should also be given priority when contributing to classroom discussions.

“When I do activist circles or workshops, I often say, ‘OK, if you’re white and you look like me and you raise your hand, I’m not going to pick on you before someone of color,’” said Ashburn.

According to Ashburn, Dalhousie and other universities need to deal with the issue of misogyny on campus “within a trauma informed, feminist, survivor-centered collaborative approach.” She encouraged students to abandon their “white privilege” as one method to reduce misogyny on campus.

“[W]hite people need to start unlearning their privilege and challenging ourselves,” said Ashburn, adding that “anyone who holds privilege in this culture needs to seriously begin the work of giving up that privilege and learning how to live without it.”

Panelist Judy Haiven, a management professor at Saint Mary’s University in Nova Scotia, compared the ‘ladies first’ approach to affirmative action when a question from Twitter suggested that calling on women first in college classrooms might engender reverse discrimination against men.

“I suppose at some point that could happen,” responded Haiver, adding that “we see women taking a back seat and being the secretaries in group projects and not being the people that advance the arguments… there has to be some type of Affirmative Action so that women, I hope, start to take more of an active role in the classroom.”

While women may be less inclined to voice their opinions during class, they surpass men in other forms of communication and leadership.

A 2011 steering committee at Princeton University found that women are more likely to “hold behind-the-scenes positions or seek to make a difference outside of elected office in campus groups.” The report also indicated that while women “do not assert themselves as often in class discussions, [they] tend to outperform men academically.”

Despite hosting the forum to partially address the behavior of male students at Dalhousie, no men were present on the panel.

In response to an audience member who questioned the lack of diverse input, Ashburn said she’s “burnt out” by those who believe discussions on misogyny should incorporate men.

When moderator Margaret Denike asked about the relationship between misogyny, racism, class discrimination, and discrimination against transgendered people and what “those who wish to see positive change” can do, she was met with uncomfortable silence.

In addition to giving women the first word in class, some Dalhousie faculty members and students recently proposed introducing a mandatory “equity course” to all degree-seeking students. The course would seek to explain “the root causes of gender-based violence and oppression,” according to UNews.