Mariana Barillas News Producer at Sinclair's The National Desk @mvbarillas on Mar 30, 2015 at 11:51 AM EDT 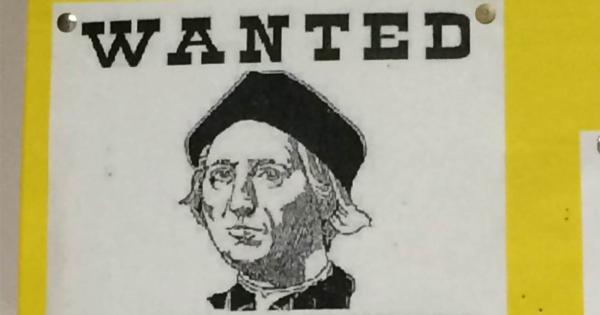 A professor at the University of Michigan-Flint put up a poster of Christopher Columbus as a wanted criminal on the anthropology program’s faculty board.

Beverley Smith, an associate professor of anthropology at the university who manages the announcement board, told Campus Reform in an interview that she put the poster up to help call into question what it means to celebrate Columbus Day. Smith said that one of her students sent her the poster in 2012 and that she has put it up on the faculty board each fall since in anticipation of Columbus Day.

"I think there’s a mythology that Columbus was benign…I don’t think people generally talk about his behavior and what he did once he got here, got established, and how he encouraged others to behave similarly."

“We need to start to see the colonial enterprise, starting with Columbus, as a war crime or as a crime against humanity and so the context of it being a ‘wanted’ poster has to do with the nature of the crimes that Columbus himself committed but also that which was the result of the colonial enterprise in itself,” said Smith.

Referring to The Conquest of America: The Question of the Other by Tzvetan Todorov, Smith said that the various activities of Columbus in the Caribbean included enslaving the native population, establishing industries for European profit, and mass execution of Taino people who “refused or could not work in the mines.”

Smith said that Columbus “oversaw the exploitation and ultimate destruction of the Taino people,” adding that it is estimated that almost one million Taino people died from disease, work, execution, and warfare within the first 100 years of contact.

“I think there’s a mythology that Columbus was benign…I don’t think people generally talk about his behavior and what he did once he got here, got established, and how he encouraged others to behave similarly,” she said.

Smith said she sees the poster as an “an important reminder that contact was a devastating event for Native American people” and that she believes people should have a better understanding of “what and who they are actually celebrating” on Columbus Day and recognize that some might find celebrating the historic figure as offensive.

“I think what’s important is that Native American people not be forgotten…We need to have a broader perspective on the implications of colonialism and decide for ourselves, as individuals, how we feel about celebrating that person,” said Smith, who said she supported Indigenous Peoples’ Day, which began as a counter-celebration of Columbus Day.

Smith said that she believes the poster fits into the university’s educational mission and she incorporates some of its themes into her Native American ethnography course, which she is currently teaching.

“[The poster] initiates conversation, that’s what a university is for— to see different points of view and perhaps to challenge people’s intuitive notion that colonialism is without harm, that colonialism is always a good thing for everyone involved,” said Smith.

Smith added that responses from her students have been positive with many recognizing “that it is difficult to celebrate the accomplishments of this person.”

Daniel Cores, a chemistry sophomore, said that the “inflammatory” language of the wanted poster “seems a little unprofessional” and that “faculty should be a little more careful about putting stuff up like that, but I have nothing against it.”

“I agree with some of the things it says but it seems like it’s trying a little too hard to be shocking.”

Johnathan Belanger, who recently graduated with a degree in anthropology from the university, said that the the department teaches “cultural relativism” and that he did not find it “surprising that they would have this posted, nor do I find it out of place”

“Students should be smart enough to look to more than just one source and not just take whatever their professors say or teach as automatically true.”