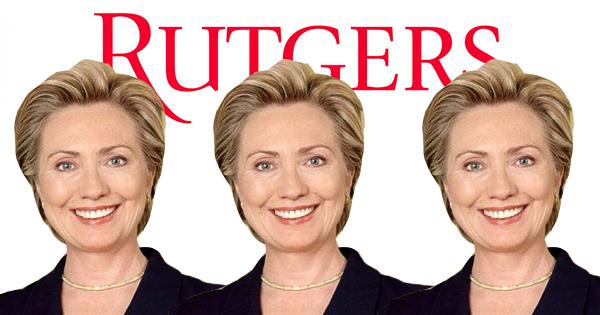 Hillary Clinton kicked off her presidential campaign at a community college in Iowa, but students at Rutgers University have spent months learning about the female presidential hopeful.

During the spring semester, first-year students at the public university in New Brunswick, N.J. have been learning about the former First Lady in a class titled “A Woman for President?” The one-credit class is one of the university's Byrne seminars, which are discussion-based courses designed to help first-year students ease into college-level curriculum.

“This seminar made me understand just how important it is for all of us to have a woman as president.”

“Each seminar is unique; some include work in a laboratory on campus, and others might require you to complete a creative group project,” explains the university’s website. “Most seminars involve an out-of-class excursion, to see a play in New York or visit a museum in Philadelphia, for example.”

Students enrolled in this course, however, spent their “out-of-class excursion” travelling to the Clinton Global Initiative in New York City. According to the university, the intimate group of mostly-female students has also heard from guest lecturers throughout the semester, including Karen Kominsky, who served as director of New Jersey’s 2008 Hillary Clinton for President Campaign.

“This seminar made me understand just how important it is for all of us to have a woman as president,” Skyler Bolkin, a student enrolled in the course, told Rutgers Today, adding that“[i]t’s so exciting because Hillary Clinton has a much greater chance than any other woman now or in the past.”

Professor Ruth Mandel, who teaches the course and serves as director of Rutgers’ Eagleton Institute of Politics, views the former secretary of state’s presidential bid as fate.

“I’ve come to view this as her destiny, but I’ve learned that in electoral politics nothing is inevitable,” said Mandel.

The declared purpose of the course is to teach students about Clinton’s female predecessors in politics including, but not limited to the nation’s first female vice presidential candidate, Geraldine Ferraro, and the first African-American woman to serve in the U.S. House of Representatives, Shirley Chisholm. Other topics discussed in the course include the effects of gender on voting behavior and leadership, and how former Alaska Gov. Sarah Palin’s 2008 vice presidential nomination changed the landscape for women in politics.

“Without a woman in the executive office, it will always remain this negative stigma that a woman cannot handle being president,” said Damilola Onifade, an undergraduate student at Rutgers. “It diminishes the equality we speak of as a nation and presents women as good but not good enough.”

Professor Mandel did not return Campus Reform’s request for comment.