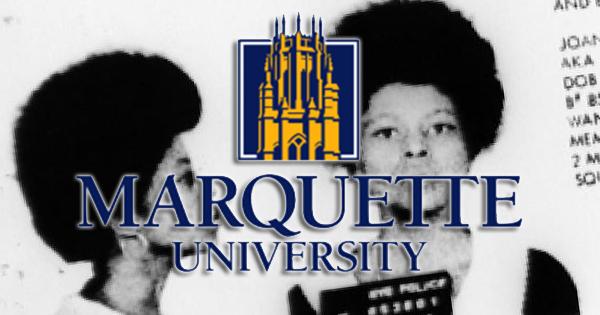 Dozens of Marquette University faculty and staff have signed a petition to the school to protest the removal of a mural which depicted a Black Panther convicted of murdering a police officer.

The mural, featuring Black Liberation Army leader Assata Shakur, was swiftly removed from the Jesuit school’s Gender and Sexuality Resource Center (GSRC) in May after a political science professor discovered it.

"Just what kind of people would blame Marquette, and refuse to come to Marquette, because Marquette would not allow a cop killer mural on campus?"

“Our university’s senior leadership just became aware of a mural that was created and displayed in a remote area of campus,” a statement from the university on May 17 said. “This is extremely disappointing as the mural does not reflect the Guiding Values of Marquette University. It is being removed immediately. We are reviewing the circumstances surrounding the mural and will take appropriate action.”

But the removal of the mural—and the departure of GSRC director Susannah Bartlow—has angered more than 60 Marquette faculty and staff who signed onto a petition to the university to participate in discussions on race and how to make students feel “whole.”

Bartlow left her directorship position at the Milwaukee, Wisconsin school two days after the removal of the mural; university officials have declined to say whether she was fired or resigned.

“[T]he racial politics of the erasure of the mural were not considered with care. A group of black women students asks for a space to self-educate and explore,” the petition states.

“Or was their initial request, that for space to invest in the representations of black women on campus, simply denied and stripped away?” it asks. “Where is the care for our students, their desire to engage in serious and difficult conversations?”

“That sixty-plus people signed this shows how corrupt Marquette has become,” McAdams wrote in his conclusion. “ It’s true that this is only a small proportion of all Marquette faculty and staff. But this mentality permeates certain departments at Marquette, including two departments integral to a liberal arts education: English and Philosophy. And it’s dominant among the activists who are constantly pushing Marquette to be less and less a Catholic university, or more a citadel of secular political correctness.”

“Just what kind of people would blame Marquette, and refuse to come to Marquette, because Marquette would not allow a cop killer mural on campus? Apparently the sort of people that Franzoi would want to have at Marquette,” McAdams wrote on his blog. “But not everybody thinks what Marquette needs more of the sort of leftists who think killing cops is acceptable. That is if a black kills a white cop. A white killing a black cop is something the leftists would really dislike.”

McAdams’ co-workers also took a stab at him in their petition to the university by implying that because he is white and the first to bring national attention to the mural, he is culpable for racism.

“Does the university note that the involvement of Professor McAdams in drawing attention to the mural after its painting on March 24, 2015, means that a white male professor’s voice has taken prominence over the voices of many black female students, and the staff who took their project seriously and sought to give them space for conversation,” the petition states. “What is the university planning to do to make those students whole?”

McAdams, a tenured professor at the private university, came under fire from the school in 2014 for a blog post he wrote regarding a graduate assistant’s refusal to discuss same-sex marriage as she declared any opposition is “homophobic.”

The graduate assistant left Marquette to attend the University of Colorado, Boulder. McAdams was originally suspended with pay, but was notified in February of the university’s intent to fire him.

According to the Milwaukee-Wisconsin Journal Sentinel, university officials maintain they are open to discussions with the exasperated faculty but said the discussions should have been held before the mural was even created.

"We cannot in good conscience, as a Catholic, Jesuit institution, allow for a convicted murderer and fugitive to be held up as a model for our students," Brian Dorrington, a university spokesperson, told the Journal Sentinel. "There is a significant difference in having an intellectual discussion of a controversial issue and showcasing that issue on a wall with no context or opportunity to present different views. This was a display, not an intellectual conversation."

While Shakur was convicted of murdering a New Jersey state trooper in 1973, she escaped from prison and fled to Cuba. Her supporters generally claim that she was innocent and framed.

“While she is certainly a controversial figure, by adopting the narrative of pure vilification, the university has applied a problematic standard,” the faculty’s petition states. “The opportunity to sponsor a discussion about the appropriateness or inappropriateness of the mural’s subject was completely lost. Any context about race, policing, and the present moment and historical legacy surrounding these issues were ignored, including any reflection on Marquette’s own place within the social justice landscape.”