Mariana Barillas News Producer at Sinclair's The National Desk @mvbarillas on Jun 30, 2015 at 10:42 AM EDT 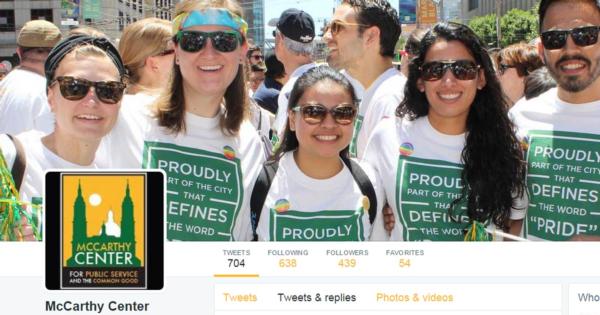 The university’s official Twitter and Facebook accounts features a number of postings about the Obergefell v. Hodges decision and the San Francisco Pride Parade, which occurred the same weekend.

Ann-Marie Devine, senior director of media relations said that the “University does not have an official statement on the SCOTUS ruling. It is not customary to issue reactionary statements on Supreme Court decisions.”

The Leo T. McCarthy Center for Public Service and the Common Good page shared similar content, including featuring a staff member who participated in the Parade, and encouraged people to send photos of their best “pride t-shirt.” The University of San Francisco and McCarthy Center Twitter accounts retweeted a number of photos of Pride Parade participants wearing t-shirts featuring the USF logo. The school’s mascot also attended, according to one photo.

“Fernando, our Coordinator for Community Partnerships is wearing his #USFCA Pride shirt while marching in the Parade today. Show off your best #USFCA Pride t-shirt and tag us on Instagram @McCarthy_Center, Facebook and Twitter @USF_LTMC for a chance to be featured! #usfcaLTMC#SFPride2015,” reads a McCarthy Center Facebook post.

Catholic Church doctrine holds that marriage is between one man and one woman, as expressed by the Congregation for the Doctrine of the Faith in “ Considerations Regarding Proposals to Give Legal Recognition to Unions between Homosexual Persons.”

The United States Conference of Catholic Bishops has said that “the attempt to ‘redefine’ marriage to include two persons of the same sex denies the reality of what marriage is.”

The university’s mission, according to its website, is to promote “learning in the Jesuit Catholic tradition.”