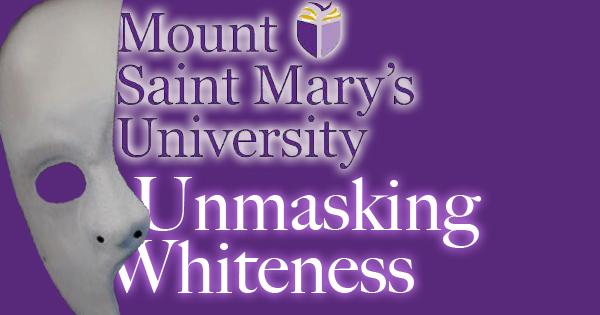 The University of Mount St. Mary’s (LA) co-hosted an “Unmasking Whiteness” event this past weekend with the Los Angeles chapter of the Alliance of White Anti-Racists Everywhere (AWARE).

The event, which took place from July 23-26th, was described as an “an intensive 4-day institute designed specifically for white people.” Students could also receive three credit hours (the equivalent of a standard semester-long course) through the University of Colorado Colorado Springs (UCCS).

"In order to challenge racism and dismantle white supremacy, white people need to unlearn racism and discover the ways we enact white privilege."

According to the website for the event, participants were to “consider how being white shapes [their] lives, discover [their] role as white people in the struggle for social justice, and examine how to build stronger alliances with people of color.”

A flyer for the event further explains that the institute invited “white people to explore: The Meanings of Whiteness, White privilege & Multiple identities, How to Resolve Guilt & Shame, Institutional Racism and the Development of an Anti-Racist Practice and Identity.”

The four day institute was co-sponsored by the Mount St. Mary’s Education Department and the chair of the department, Shelly Tochluk, was listed as the point of contact on the flyer.

In addition to facilitating events such as “ White People, Know Thyself!” at the 2015 White Privilege Conference (and working as a facilitator at each previous incarnation of the conference), Tochluk is also the author of Witnessing Whiteness: First Steps Toward an Antiracist Practice and Culture. Tochluk’s faculty page describes the book as “a comprehensive introduction to issues of race, white skin privilege, and white racial identity.”

Tochluk’s faculty page also states that she “has extensive experience in cross-race dialogue.”

White students are in the minority at Mount St. Mary’s University, making up just 15% of the student body. 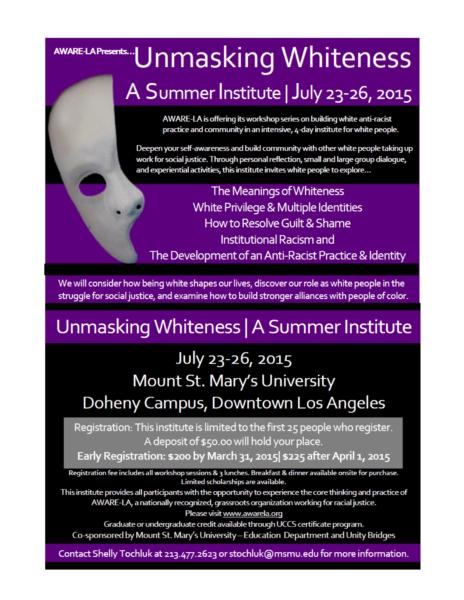 According to AWARE-LA’s website, each of the yearly “Unmasking Whiteness” events since 2010 has been held at Mount St. Mary’s.

In addition to offering credit hours for “Unmasking Whiteness”, the University of Colorado Colorado Springs also offers class credit for programs such as the “Social Justice Training Institute” and “Intersections of Privilege,” which requires the student to register for and attend the annual White Privilege Conference, which offers tickets for college students at a discount price of $200.

Similarly, tickets for the four-day “Unmasking Whiteness” event started at $200.

On the front page of its website, AWARE-LA lists seven “reasons for organizing as a white anti-racist community.” In order, the reasons are as follows:

“People of color shouldn’t always have to be the ones to educate white people about racism and oppression.

“In order to challenge racism and dismantle white supremacy, white people need to unlearn racism and discover the ways we enact white privilege.”

“A commitment to anti-racist identity and practice as a white person can sometimes mean increased alienation and conflict in our lives, especially with other white friends and family who disagree with us.”

“AWARE is a supplement to, not a replacement for, multi-racial dialogues and activism between white people and people of color.”

“A white space serves as a resource to people of color who want to work with white people but don’t want to have to spend all their energy dealing with the racism of white people.”

According to Professor Tochluk’s faculty page, she is a member of AWARE-LA and facilitates the four-day “Unmasking Whiteness Summer Institute."

Campus Reform attempted to reach Shelly Tochluk for comment at her university phone number but her voicemail stated that she was out of the office for all of June and July.