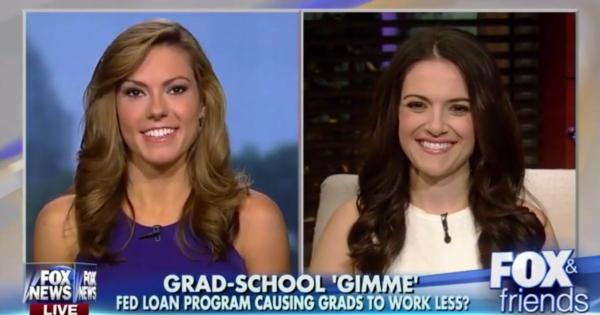 A newly released report from the U.S. Department of Education shows graduate students are responsible for nearly half of the country’s $1.2 trillion student debt and some of these borrowers may never completely repay their debt thanks to federal income-based repayment plans and loan forgiveness programs.

So are taxpayers being forced to fund highly educated deadbeats?

Konst said while these facts may be true, graduate earners are the highest earners and have the lowest unemployment rate in the country.

“Those who get out of grad school and have this high debt, actually start paying into the system right away, more than any other earners,” Konst said. “Seventy two percent of graduate degree earners have jobs straight out of graduate school.”

Boothe argued that the graduate students responsible for more than 40 percent of the student loan debt represent just 14 percent of the total number of students in the higher education system.

“We are encouraging these highly educated deadbeats, this is one of the fastest growing entitlements that we have right now,” Boothe said. “These students are taking advantage of programs like the income-based repayments, which has doubled under President Obama over the past two years, and in student loan debt forgiveness and it’s at the expense of taxpayers.”

Boothe also referenced a recent Federal Reserve Bank of New York study that shows for every three dollars the federal government pumps into the system, tuition increases by two dollars.

Although the federal government allows undergrads to borrow up to $56,500 if they have independent tax status and up to $31,000 for dependents, the only borrowing stipulation placed on graduate students is that they may take out no more than the total cost of attendance.

Students who need assistance the least—graduate students who will eventually earn higher salaries than bachelor’s degree holders—will benefit the most through income-based repayment and loan forgiveness programs.

“[B]anks never would have allowed this forgiveness because they have to make money, they’re a for-profit business. But the government is in control now and we are taking the bath,” Fox’s Brian Kilmeade said, ending the segment.