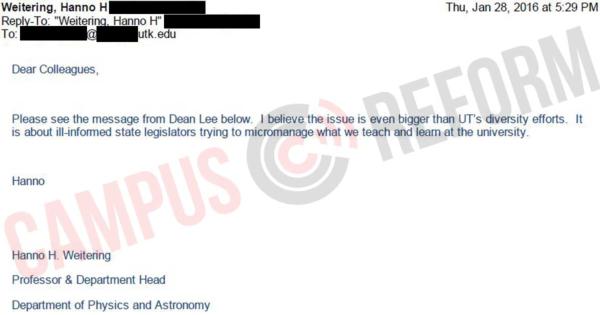 Administrators at the University of Tennessee-Knoxville are up in arms over recently-proposed legislation that would severely curtail spending on diversity efforts.

Senate Bill 1902, introduced last week by State Sen. Frank Niceley (R), would prohibit the UT system and its institutions from spending more than $2,500,000 per year “on diversity, multicultural, or sustainability programs,” and would also require the university to submit an annual report to the General Assembly containing an itemized list of all expenditures made for such purposes. A companion bill, HB 2066, was simultaneously introduced in the House by State Rep. Martin Daniel (R).

"To make sure this is stopped UT faculty, staff, and students should respond as strongly as possible..."

According to an email circulated among faculty and administrators Thursday afternoon, the university is hoping to defeat the legislation by mobilizing students and employees to agitate against it.

The initial email outlining the school’s opposition to the bill was composed by Public Relations professor Candace White for the benefit of her immediate colleagues, and was subsequently forwarded to additional faculty by Arts & Sciences Dean Theresa Lee. Several hours later, the email was passed along to Physics and Astronomy graduate students by department head Hanno Weitering, one of whom shared its contents with Campus Reform on condition of anonymity.

"Yesterday the University Faculty Council met (via teleconference) with Anthony Haynes, UT System Vice President for Government Relations,” White began the email to her colleagues, explaining that Haynes had “asked for our help to defeat a bill introduced in both the [H]ouse and [S]enate that will greatly affect our diversity efforts, and possibly impact our accreditation.”

Specifically, White related concerns that “the bill would prohibit us, by state law, from holding Diversity Week and affect what we can do in classes” because in addition to dramatically reducing the school’s diversity budget, it also prohibits employees whose primary duties are not diversity-related from participating in diversity activities during their normal work hours. 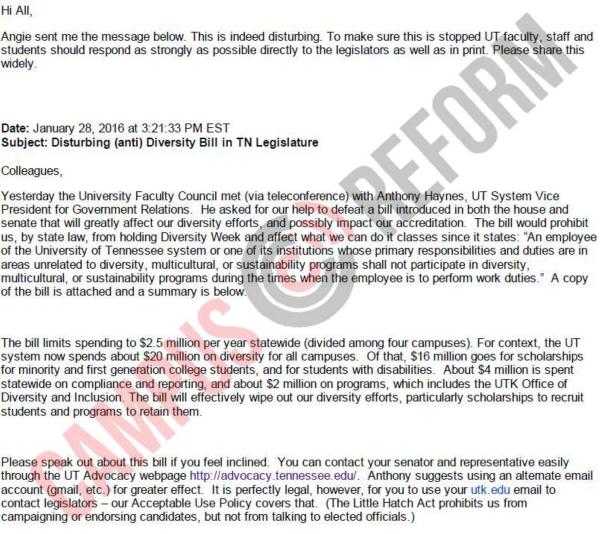 “For context, the UT system now spends about $20 million on diversity for all campuses,” she noted, of which “$16 million goes for scholarships for minority and first-generation college students,” another $4 million is spent on “statewide compliance and reporting,” and roughly $2 million is spent on actual programming.

“The bill will effectively wipe out our diversity efforts, particular scholarships to recruit students and programs to retain them,” she laments, concluding with a call to “speak out against this bill if you feel inclined,” complete with a link to the UT Advocacy webpage, through which individuals may contact their senator and representative directly. She relates that Haynes suggested using a personal email account “for greater effect,” but asserts that “it is perfectly legal … for you to use your utk.edu email to contact legislators.”

Less than half an hour after White sent the email, it was forward to a lengthy list of additional recipients by Dean Lee, along with her endorsement of its content.

“This is indeed disturbing,” Lee wrote. “To make sure this is stopped UT faculty, staff, and students should respond as strongly as possible directly to the legislators as well as in print.”

Heeding her suggestion, Dr. Weitering forwarded the message to his graduate students Thursday evening while adding criticism of his own.

“I believe the issue is even bigger than UT’s diversity efforts,” he told students, opining that the larger concern has to do with “ill-informed state legislators trying to micromanage what we teach and learn at the university.”

At least one student was not impressed with the email, describing it to Campus Reform as “a complete waste of time” for both administrators and students, and asserting that “passing along liberal ideals via email from a department head (of one of the sciences) to students is an abuse of power [and] misuse of school resources (i.e. student tuition and fees as well as taxpayer money).”

The student also disputed the notion that UT’s current diversity spending is too important to cut, pointing out that the Diversity Office has been engulfed in multiple scandals over the past year that have together made the student “ashamed” for the school.

In September, for instance, the office drew fire for publishing a primer on gender-neutral pronoun usage, ultimately deleting the page after state lawmakers began alluding to the possibility of legislative action to cut the university’s funding.

A similar scenario unfolded in December, when the Office of Diversity and Inclusion was compelled to remove guidelines for “inclusive holiday celebrations” that identified all references to religion or culture—even “Secret Santa” gift exchanges—as threatening to turn a holiday party into “a Christmas party in disguise.”

Campus Reform reached out to White, Lee, and Weitering for a response to those objections, but did not receive a response by press time.