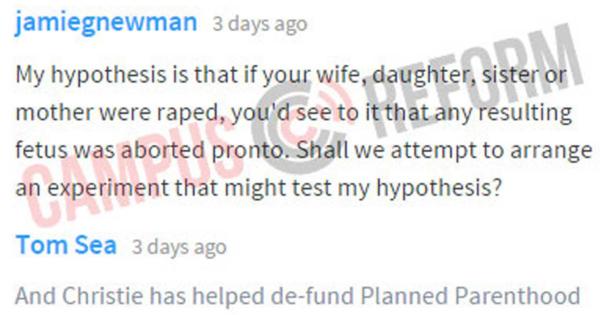 The Purdue University Police Department (PUPD) launched an investigation into the alleged threats on Thursday morning but concluded the investigation that evening after it found insufficient evidence to terminate Newman. The school is nonetheless strongly condemning his “outrageous and vulgar” statements, demanding nothing less than a full apology and explanation for “the harm he’s done” to the Purdue community.

"Maybe you'd [enjoy] holding her down as I rape her, knowing that the three of us would be engaged in the joyful task of making a baby."

Campus Reform initially broke the story that Newman posted a string of controversial comments on Purdue Students for Life’s (PSL) Facebook page, and then allegedly posted a comment on Live Action News threatening to rape the “wife/daughter/great grandmother” of another commenter on the site.

Earlier this month, PSL distributed flyers on Purdue’s campus containing the slogan “hands up, don’t abort,” referencing the rhetoric of the Black Lives Matter movement, which used the phrase “hands up, don’t shoot” during protests in honor of Michael Brown, the teenager who was at one point said to have had his hands up when he was shot by a police officer in Ferguson, Mo.

PSL told Campus Reform the purpose of the flyer was to show that Planned Parenthood clinics are disproportionately built in predominantly black neighborhoods.

The message, however, was poorly received at Purdue, where many called the demonstration an act of racism, including Newman, who called the group “vile, racist idiots.”

On Wednesday, a Disqus account known as “jamiegnewman” posted a comment on Live Action News in which the account holder states he “did in fact offer to rape the wife/daughter/great grandmother” of another commenter.

Newman, however, continues to state that “this allegation is a complete fabrication, for which not one iota of evidence exists.”

In a comment on Live Action News, for example, from the account known as “jamiegnewman,” the account holder states that he “just posted on the CBR Facebook page.” The comment was posted to Live Action News four months ago, according to a screenshot obtained by Campus Reform. According to commenter “Tulia_Ciceronis,” whom “jamiegnewman” was dialoguing with at the time, CBR stands for “The Center for Bioethical Reform.” 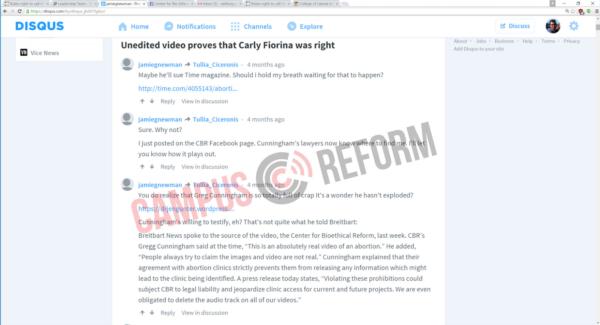 “When will you be telling where you got that video? Or perhaps you’re afraid you’ll go to jail if you do,” Newman wrote on CBR’s Facebook page four months ago. 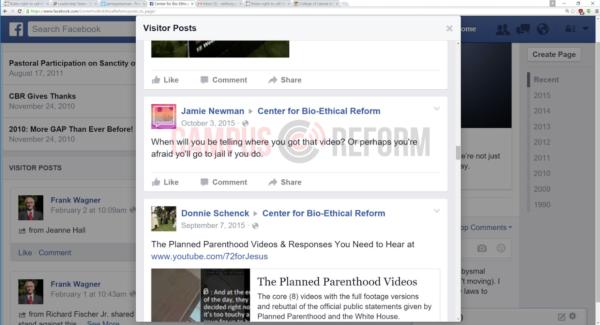 Screenshots show “jamiegnewman” was discussing the undercover Planned Parenthood videos produced by the Center for Medical Progress, which was working in conjunction with CBR. Newman mentions a “video” in his post on CBR’s Facebook. 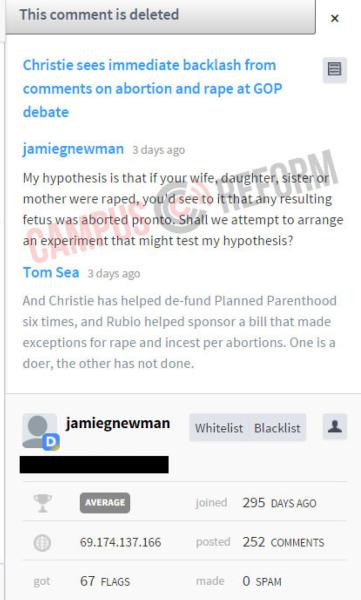 Another series of comments Live Action News claims to have retrieved from the "jamiegnewman” account shows the account holder discussing the details of the “experiment.”

"Maybe you'd get a thrill holding her down as I rape her, knowing that the three of us would be engaged in the joyful task of making a baby," "jamiegnewman" wrote in another comment.

"No, no, no. I'd only rape someone if you were watching, because i [sic] know it would turn you on to see a beautiful new baby conceived in real time. Last I checked, you weren't my wife," the account said in another post.

As a result of the controversy, Purdue’s attorney Steve Schultz asked Newman to issue a “full apology and explanation” in a statement obtained by Campus Reform in which Schultz calls “Newman’s obnoxious rhetoric” an “embarrassment for Purdue.”

“As we’ve already indicated, a threat of rape is outside the bounds of any definition of protected speech. And if it appeared that Mr. Newman had any such intention, he would have been terminated immediately. But the police investigation tells us that there was, and is, no real threat to the campus community. That finding does not foreclose the possibility of other employment-related actions based on Purdue’s internal complaint processes.

The disruption we’ve endured as a community is entirely due to Mr. Newman’s online posts. Anything other than a full apology and explanation from him about the intent of his statement will be insufficient to cure the harm he’s done.

It’s fortunate for Mr. Newman that he works at a public university both obligated under the First Amendment and committed by principle to protect free speech — even speech as abhorrent as his. Had he uttered such an outrageous and vulgar statement while working for a private college or other private employer, he would almost certainly have been fired on the spot. Mr. Newman’s obnoxious rhetoric is an embarrassment for Purdue, but our special obligations as a public institution impose a much higher threshold before condemnation can be extended to punishment.”

However, Newman refuses to apologize and is even demanding the university apologize to him.

“If anything, you owe me an apology — indeed, you should probably be begging my forgiveness — for facilitating the dissemination of fabricated and defamatory statements about me, and for failing to vehemently denounce the effort made of Students For Life to destroy my life and career. I'm not planning to hold my breath waiting for one,” Newman wrote in an email to Schultz.

The PUPD conducted an investigation into Newman’s alleged threats that started and ended on Thursday. PUPD concluded that there was not sufficient grounds to terminate Newman’s employment but still passed the investigation on to the county prosecutor for review.

Students and alumni are protesting the decision to keep Newman on staff. A petition started by a Purdue alum is demanding that Newman be “terminated.”

“Besides the cyber-bullying and ruthless name calling, he actually threatened to rape the female family members of an individual...this sort of conduct is disappointing and shameful. As an alum of this great institution, I call upon Mitch Daniels to immediately terminate Jamie Newman's employment and all ties he has with the university. It is unfathomable that someone in his position can maintain a presence on a university that prides itself on welcoming new ideas and encouraging thoughtful discussions,” the petition states.

On Monday, a group of students and alumni will protest outside of Daniels’ office in an effort to suspend Newman from the university.

“As a leading Big Ten University, Purdue has an obligation to maintain the safety of its student body and the professionalism of its staff,” the Facebook page for the event states. “The threats of violence against women that came from Jamie Newman this past week are inexcusable under any circumstance and should be an outrage to the entire student body, regardless of political persuasion. No one should fear reprisal from University employees as a result of expressing their beliefs. We call on the University to suspend Jamie Newman in light of his reprehensible actions and restore our confidence in this historic institution.”

Based on information found on Purdue’s website, it seems that the university may not need any grounds to terminate Newman, since all employees are hired under an “at will” contract and can be terminated “at any time, with or without cause or notice.”

Campus Reform reached out to Daniels for a comment on the situation but received no response. Members of PSL told Campus Reform they hoped to meet with Daniels on Friday but could not because he was out of town on university business.