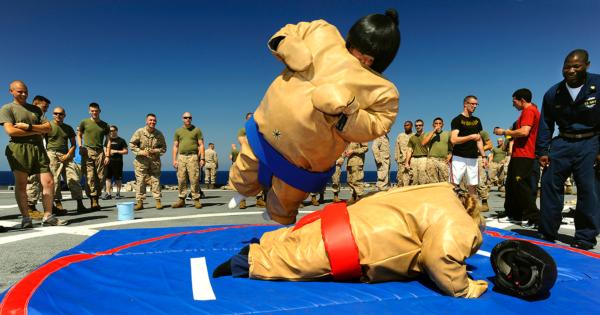 The student government at the University of California-Davis (UC Davis) quickly saved face after its constituents scorned the governing body for renting out a pair of sumo suits for an annual campus block party.

Students accused the Associated Students of the University of California-Davis (ASUCD) of fat shaming, and culturally appropriating the traditions of the Japanese people.

“My overall impression is that this conversation is in itself an expression of white-supremacist anti-Asian structural racism,” student Scott Tsuchitani told The California Aggie. “Asian Americans are treated as mute, hapless victims, devoid of agency, a.k.a. the ‘model minority’ stereotype. That is what is being re-inscribed by this conversation.”

Another student, Phil Jones, was shocked at ASUCD’s insensitivity towards overweight students on campus, even demanding financial reimbursement for the emotional distress.

“To be honest, I was shocked. February 19th was Remembrance Day for Japanese internment during WWII, and some of my Japanese friends were heavily traumatized by seeing their culture mocked in such a clearly racist fashion,” Jones wrote in a Facebook post on the event’s page. “Not to mention, as a heavy-American, I don’t appreciate the blatant Fat-Shaming involved with caricaturing one of the few sports traditionally enjoyed by Heavy individuals.”

Jones went on to demand “reparations payments” for “affected individuals” and asked for the resignation of all senators responsible for hosting the event.

ASUCD immediately apologize “for any harm” the Sumo Suits may have caused but some students still were not completely satisfied.

“We’d like to apologize for any harm the ‘Sumo Suit’ may have caused you all. This lapse in judgement is completely ASUCD’s fault and responsibility alone,” ASUCD wrote in a statement to the UC Davis campus. “This was an egregious oversight and it will hopefully not happen in the future.”

The apology, though, did not do much by way of appeasing Tsuchitani’s frustration, who demanded all members of ASUCD complete a cultural competency training.

“It is pitiful that the ASUCD would pathologize the so-called victims as in need of treatment instead of reflecting more deeply on what is needed to address ASUCD’s own failure in this situation,” Tsuchitani said. “From my limited perspective, I would suggest that the foremost need for treatment might well be for cultural competency training for ASUCD itself.”