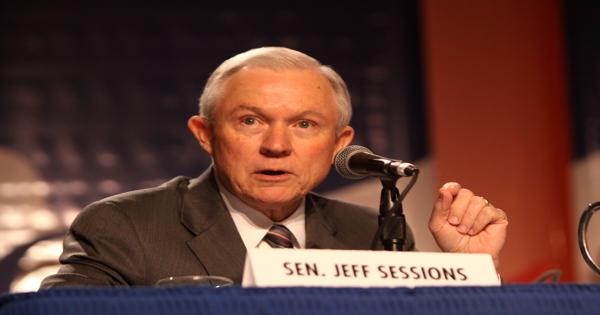 Students at the University of Alabama in Huntsville (UAH) want Sen. Jeff Sessions (R) disinvited from their commencement ceremony, saying his political positions and endorsement of Donald Trump conflict with the university’s values.

“Senator Jeff Sessions has time and time again voted counter to higher education and rights for all of the populace of these United States,” student Victoria Forrester complains in a Change.org petition calling on the school to revoke his invitation. “His voting record has shown a disregard for the funding of public education in this great nation while also voting counter to programs that support the underprivileged and vulnerable.”

"...I don't see why I should have to anticipate possible violence at my graduation.”

The petition also decries the “unsavory” ratings Sessions has earned from liberal interest groups such as national teachers’ unions, the ACLU, and the Human Rights Campaign.

The coup de grace for Forrester, though, is that Sessions has endorsed Donald Trump for president.

“It is known that Republican Presidential [c]andidate Donald J. Trump has said many inflammatory remarks towards women, the disabled, and immigrants … all of which are populations not to be forgotten at this University,” she states. “Donald J. Trump has proposed a large amount of cuts and downsizing of the Department of Education that will likely interfere with the federal funds necessary to run our beautiful institution and provide students the opportunity of a higher education.”

Forrester reiterated those arguments in an interview with WAFF Monday, but also expressed concerns that Sessions’ appearance will spark violence due to his endorsement of Trump, saying, “There's been a lot of violence at those rallies … [and] I don't see why I should have to anticipate possible violence at my graduation.”

At press time, Forrester’s petition had garnered 462 signatures, just short of its stated goal of 500, but so far the university has held firm and refused to revoke Sessions’ invitation.

“The Honorable Jeff Sessions has ably served the people of Alabama as United States Senator since 1997, and was the unanimous choice for Commencement speaker of a diverse selection committee that represents students, faculty, and staff,” a university spokesperson told WAFF. “As a University that values inclusiveness, we welcome Senator Sessions with the respect and civility that he and his office deserve.”

“This decision was made well in advance of any endorsements or anything of that nature, months ago,” observed Student Government Association President Austin Finley, who served on the selection committee and supports Sessions’ invitation. “Senator Sessions has been a strong supporter of our military, and I'm very thankful for his service to the state of Alabama and to this country.”

Forrester told WAFF that she will respect the university’s wishes if they do not withdraw the invitation, but is still hoping that administrators will reconsider after she delivers her petition to the provost.