Mizzou being investigated by lawmakers over mishandling of campus protests 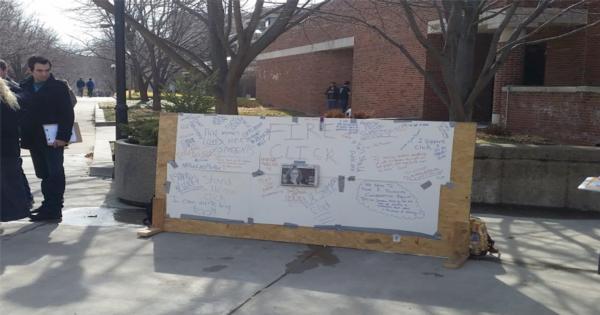 The Missouri legislature has approved a “University of Missouri Review Commission” to review the school’s handling of November’s student protests, which left Mizzou desperate for students and funding.

“A lot of the reason it is not fixed—some of it’s inertia, and some of it, you will just ruffle so many feathers of people who don’t want change."

The commission was proposed by state senator Kurt Schaefer in March, and finally passed in the Missouri House Tuesday following months of tension over how best to address the issues facing the UM System, The Columbia Missourian reports.

The motion had previously passed the Senate shortly after being introduced, at the time earning Mizzou Vice President for University Relations Steve Knorr’s approval, saying he welcomes outside help from the state legislature.

The commission was not approved without some controversy, though, as many Democratic lawmakers were angered that their party will be excluded from appointing members to the commission, a responsibility reserved exclusively for the Speaker of the House and Senate President, both of which offices are currently filled by Republicans.

The creation of the review committee comes in the wake of a series of budget battles in which lawmakers first denied the university a $26.8 million budget increase, then imposed a roughly $8 million cut, with both portrayed as rebukes of Mizzou’s refusal to fire Melissa Click, the professor who called for “muscle” to remove a student journalist from the scene of the protests.

The budget cuts, however, were not entirely a result of Melissa Click’s assault of a student journalist. Rep. Tom Flanigan, for example, noted that lawmakers have several concerns with Mizzou’s administrative bureaucracy, which he said “rivals the Pentagon in terms of red tapes and delays.”

Flanigan is also highly critical of Mizzou’s strict tenure standards, citing how difficult it can be to “terminate employees who participate in conduct unbecoming” to the university and the state.

Shaefer addressed both arguments, saying the review commission will have the opportunity to address potential corruption within Mizzou’s administration, and will also be composed of outside hires capable of bringing a fresh perspective to Mizzou’s campus.

“A lot of the reason it is not fixed—some of it’s inertia, and some of it, you will just ruffle so many feathers of people who don’t want change,” Shaefer said. “So this is the ability to take an outside group and give an outside, objective perspective.”

But not all lawmakers are satisfied with the turn the discussion has taken, especially Assistant House Minority Floor Leader Gail McCann Beatty, who believes the conversation should be more about racial concerns raised by protesters rather than administrative issues.

“We need to have an honest conversation to say that there is a problem on the campus and that it needs to be addressed,” McCann Beatty told Missourinet. “I have had a number of conversations with some of my colleagues who either don’t believe that there is really a problem on campus or that students just went too far. My response to them is sometimes you have to take things a little far in order to get change.”