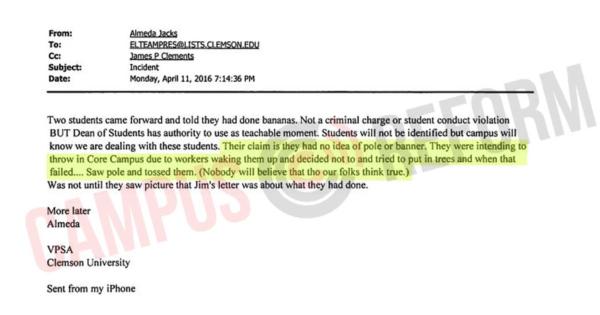 Clemson administrators apparently knew more than they let on about the nature of the now-infamous "banana banner" incident, but did nothing to disabuse those who believed it was a form of hate speech.

According to emails released by Clemson under the Freedom of Information Act—which were serendipitously acquired by Campus Reform—key administrators had information, which they believed to be accurate, suggesting that there was no racial motivation behind an incident that inspired protests and a sit-in that resulted in the arrest of five students.

"Their claim is they had no idea of pole or banner...(Nobody will believe that tho our folks think true)."

On Monday, April 11, a bunch of bananas was found hanging from a banner honoring the history of African-Americans at Fort Hill, a museum that was once a plantation owned by John Calhoun, just one day before the scheduled groundbreaking for a historical marker identifying the location of the former slave quarters at the site.

The incident prompted an outpouring of condemnation against the "offensive" act, and an open forum was held the following day to discuss the incident, during which Associate English professor Rhondda Robinson Thomas called for mandatory diversity and inclusivity courses for all students.

On Wednesday, students held a "Black Out" protest, during which an informal student group called "See the Stripes" reiterated its previous demands for diversity initiatives, implicitly blaming the incident on the university’s failure to implement measures such as increased funding for minority student groups or hiring more faculty of color.

The university was well aware of the building tensions from the beginning, and administrators were particularly mindful of the fact that April 13 was the national "#studentblackout" protest.

Director of Marketing and Strategic Engagement Kesha Williams had predicted as much by 12:20 on Monday, writing, "Prof. Kumanyika's tweet is a direct call to action. Students may march now." 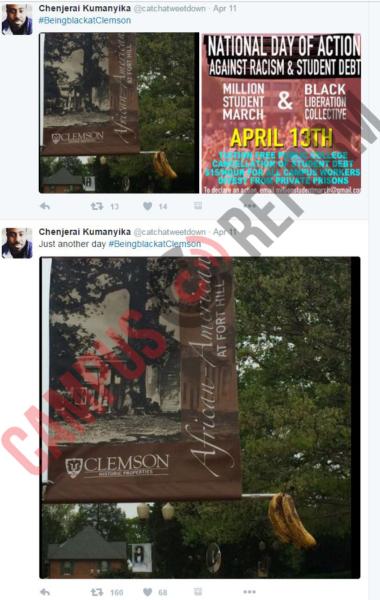 Williams was responding to an email from Director of Media Relations John Gouch, who had observed, "I see that it is spreading. It's a great shame that many of the commenters are blaming the university and not one jerk."

Additional details were revealed that evening at 7:14, when Dr. Almeda Jacks, Vice President for Student Affairs, sent an email to top administrators, including President James Clements, reporting that two students had come forward "and told they had done bananas [sic]."

Jacks concedes that the students had not violated any law or policy, but nonetheless suggests that "Dean of Students has authority to use as a teachable moment," even if the details couldn’t be revealed.

"Their claim is they had no idea of pole or banner," she explains. "They were intending to throw in Core Campus due to workers waking them up and decided not to and tried to put in trees and when that failed... Saw pole and tossed them (Nobody will believe that tho our folks think true)."

Core Campus is a major campus expansion that is currently under construction, and will boast dining facilities and student housing when complete.

A few hours later, however, when Clements received an email from a student (name redacted) thanking him for acknowledging how "hurtful" such actions are to "the very small African American community here at Clemson," Clements merely instructed an aide to thank the student for the "kind words."

At least one unidentified individual broached the subject with Jacks around the same time, asking for an explanation as to what was offensive about the incident. She responded evasively, saying, "Not sure I understand your question or statement," and evidently failed to reply when the individual attempted to clarify by asking, "why are you guys going bananas over bananas ... literally?"

Despite plausible information to the contrary, Clemson issued no statements refuting the racial component throughout the subsequent ordeal, which culminated with the arrest of five students for trespassing after they occupied an administrative building for several days as part of a protest against the university's inadequate response.

Campus Reform reached out to Clemson for comment, but had not received a response by press time.