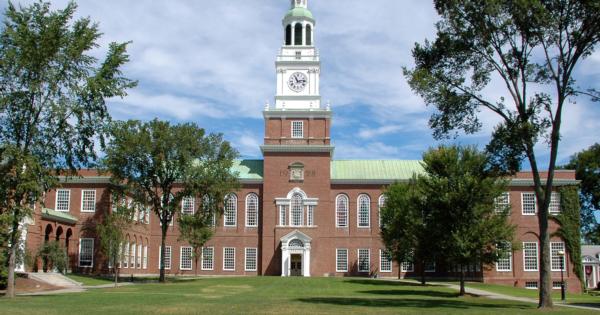 Students are questioning Dartmouth College’s commitment to racial diversity after an Asian-American professor was denied tenure.

Associate English Professor Aimee Bahng was denied tenure status in May after seven years at the Ivy League college, which some students contend is a sign that Dartmouth is not serious about its rhetorical commitments to promoting racial and cultural diversity among its faculty.

“At what point are we gone [sic] call for President Hanlon[‘]s resignation?”

The 40-year-old professor specialized in teaching and writing on Asian-American literature, feminist science and technology studies, and queer theory. She also assisted in developing a course regarding the Black Lives Matter movement.

Melissa Padilla, a 26-year-old senior, launched a campaign protesting Bahng’s tenure denial along with other students and faculty members. Together, they collected more than 3,600 signatures for an online petition addressed to Dartmouth administrators.

Protesters against the tenure denial also took to Twitter, creating the hashtags “#fight4facultycolor” and “#dontdodartmouth,” warning minority students not to attend the college because Dartmouth does not represent minorities.

“If you are a person of color DO NOT COME TO DARTMOUTH #fight4facultyofcolor #DontDoDartmouth” one tweet read.

“At what point are we gone [sic] call for President Hanlon[‘]s resignation?” the same user asked in another tweet. “He does no work for people of color on this campus #DontDoDartmouth.”

Protesters also held a rally on campus in May that featured a casket representing the "death of [their] education."

Yet according to the Guidelines for Appointments, Reappointments, Promotions, and Tenure for Faculty in Dartmouth’s “Handbook of the Faculty of Arts & Sciences,” the criteria for awarding tenure to an associate professor involve subjective judgments by the tenure committee regarding an individual’s future prospects.

“In addition to consideration of the needs of the institution, the decision to make a tenure appointment involves experienced judgment regarding expected performance in the ensuing years, based on an individual’s record at that point,” the handbook states. “It is not possible to enumerate specific qualifications for tenure so precisely and objectively that the need for judgment is obviated.”

As of fall 2014, there were 606 total tenured professors and 1,081 professors on the tenure track, but no information is available regarding how many tenure applications are denied at Dartmouth.

As stated in the handbook, the board values “the judgement of professionals outside the College,” and also takes into consideration a “qualitative assessment” (rather than quantitative) of the candidate's books, articles, artistic and professional accomplishments, and/or contributions to the scholarly community.

According to Dartmouth College, Bahng has published two books and four peer-reviewed publications. She has also received 19 fellowships and grants, including a $50,000 grant for a course on “#BlackLivesMatter,” and has participated in presentations and conferences at The American Studies Association, Modern Language Association, Association for Asian American Studies, and National Women’s Studies.

Additionally, the board takes into consideration the judgement by current and former students as well as faculty on behalf of the candidate. According to the handbook, the Board places a primary emphasis on instructions in the classroom, but specific interactions with students and a creative role in the course will be considered as well.

In addition to in class interactions, the board also looks at both the nature and quality of community service in which the candidate performs “on initiatives with students over and beyond the instructional obligations and on assistance to other colleagues in research and teaching.”

According to the National Education Association, only one-third of all college and university faculty members have currently tenure, a figure that the NEA claims has been declining as an increasing number of colleges seek to replace tenured professors with part-time instructors, who command smaller salaries and enjoy fewer job protections.

Even so, Dartmouth did propose a plan to address the issue in late-2014, amid concerns from both the student body and faculty regarding the lack of minority representation among the faculty.

The primary goal of the plan is to increase tenure-track minority faculty from 16 percent to 25 percent by 2020, an initiative that is projected to tack on an extra $100 million over the next 10 years, with a further $2 million per year going toward diversity recruitment targeting prospective students.