Mizzou protesters to be honored with ESPY award 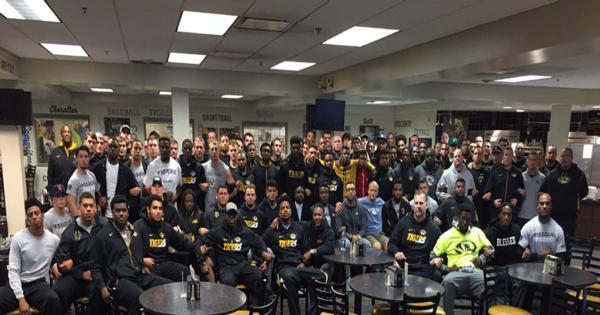 The Mizzou football team will be honored with an ESPY during this year’s ESPN award ceremony, but not for its performance on the field.

Rather, the 5-7 2015 team, which lost a few of its final games because it refused to play, will be acknowledged for its social activism efforts.

As Campus Reform reported in November, the Mizzou Tigers refused to play another game until a list of demands was met by the administration, which included the resignation of former president Tim Wolfe, who eventually gave in.

The boycott was inspired by Mizzou graduate Jonathan Butler, who embarked on a hunger strike, refusing to eat until Wolfe was fired. Later, it was discovered that Butler’s father was a top railroad executive who made $8.4 million in 2014.

A portion of the football team joined their fellow student in solidarity, but rather than refusing to eat, the team refused to practice or play football.

One player told ESPN at the time that several players and coaches were “pissed,” and that the protest would not have happened if the team was 9-0.

The boycott resulted in a string of protests on campus, during which former professor Melissa Click assaulted a student journalist on campus, throwing the school into the national spotlight (again). Click was eventually fired but the damage was already done—the school is now expecting a $32 million budget shortfall and a drop of 1,500 in student enrollment for the upcoming semester.

Nonetheless, the protesters will be honored with the “Stuart Scott ENSPIRE Award.” Scott was a famous ESPN broadcaster who died of cancer at the age of 49 and received the popular “Jimmy V Award” before his death.

“Don’t give up. Don’t ever give up,” Scott recalled his role model Jimmy Valvano saying during his acceptance speech.

The 5-7 team that stopped playing before the end of the season will be presented with its award in July.