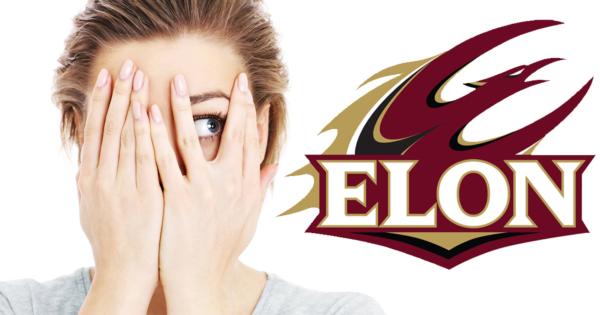 Elon University students have gathered over 300 signatures to keep a Pulitzer Prize-winning writer from speaking on campus over her “dangerous” ideas.

Kathleen Parker, a syndicated columnist for The Washington Post, was invited by school administrators to deliver the annual Baird Pulitzer Prize Lecture in October, The Pendulum reports.

Parker, described as “slightly to the right of center” and “the most widely syndicated columnist in the country”, authored the 2008 book Save the Males: Why Men Matter, Why Women Should Care.

Elon senior Becca Nipper took issue with news that Parker was invited to speak and started a Google Docs petition calling on the university to disinvite Parker. 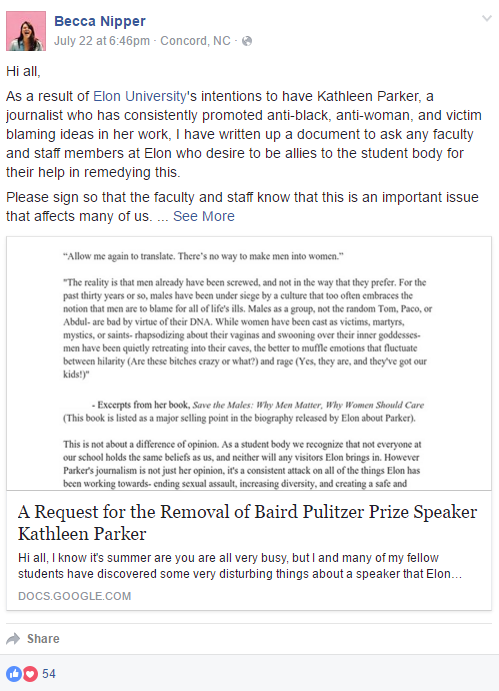 The petition’s main argument is that Parker is unfit to serve as a journalistic role model because of her dismissal of the current feminist movement.

“This is not just about difference of opinion,” the petition explained. “As a student body we recognize that not everyone at our school holds the same beliefs as we do, and neither will all visitors Elon brings in. However Parker’s journalism is more than just her opinion, it’s a consistent attack on all of the things Elon has been working towards - ending sexual assault, increasing diversity, and creating a safe and encouraging environment for all students regardless of gender, race, ethnic background, or sexual orientation.”

The petition claims that Elon students have found “some very disturbing things” in Parker’s writing that made her unfit. The petition quotes several excerpts from her book to shed light on her allegedly dangerous rebuke of modern feminism.

They include “[a]llow me to translate. There’s no way to make men into women,” and “[t]he reality is that men have been screwed, and not in the way that they prefer.”

Hyperlinks in the Google Doc sent readers to two of Parker’s Washington Post columns, but were written in a way that confuses their actual title. A link to Parker’s “Unanswered questions in Trayvon Martin case” is hyperlinked under “Racial profiling is common sense.” The words “Women are using alcohol as a way to blame men for sexual assault” linked to “Sex after drinking and the war on women.”

Nipper wrote that she had “made phone calls to multiple places on campus” and couldn’t figure out how to go about banning Parker, so the petition was made in an attempt to catch the university administration’s attention.

“We are desperately asking our faculty and staff allies to aid us in removing Parker and stopping her from spreading her dangerous rhetoric through the school we love and cherish,” the petition ended. 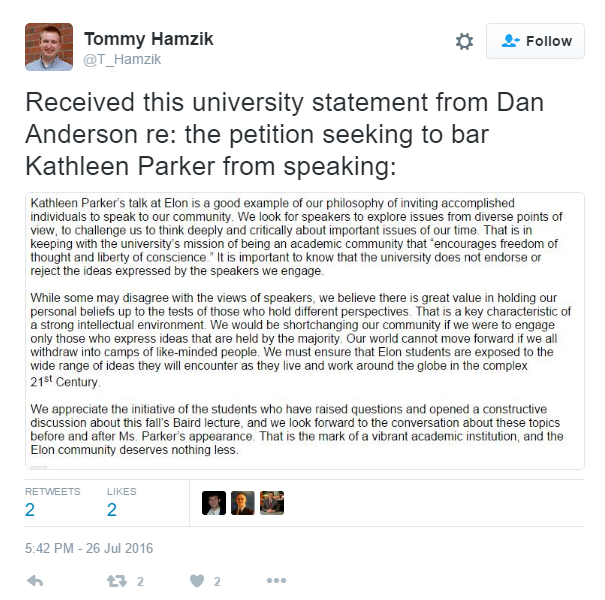 “We look for speakers to explore issues from diverse points of view, to challenge us to think deeply and critically about important issues of our time,” the statement read. “That is in keeping with the university’s mission of being an academic community that ‘encourages freedom of thought and liberty of conscience.’”

The school doubled down on the decision, saying that Parker’s speech would be a great opportunity for students to challenge their own views.

“We would be shortchanging our community if we were to engage only those who express ideas that are held by the majority,” the statement read. “Our world cannot move forward if we all withdraw into camps of like-minded people.”

Parker tweeted Wednesday that she remained interested in speaking at Elon, adding a peace sign emoji at the end.

“Dear #Elon students - I look forward to speaking w/you this fall about life, love and politics,” Parker wrote. “I’m confident we’ll learn from each other.”