The Weekly Roundup: Because otherwise we'd have to cry 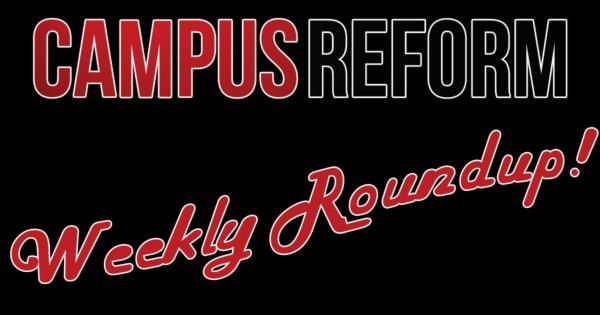 Apparently, some of the CR’s believe it’s not enough to simply self-identify as a Republican without accepting the Party’s core tenets.

What part of “private universities” does Sen. Lara not understand?

Why have defense against those who would otherwise try to arrest you for thoughtcrime if you aspire to be a nice little groupthink, establishment sheep?

U. of Oregon may rename two buildings over racial concerns

So far, the Black Lives Matter-supporting students favor naming them both after Orwell, as a tribute to the architect of their dream society.

Also pork-barreled into the policy would be a provision allowing men to take classes one day a year, Halloween, provided they’re dressed in drag.

Schools hoping to attain an “B” in this category must boast an 83%-minority-or-higher student population and disavow all remaining white students. The “A” distinction is reserved for those schools with a proportion of non-minorities consisting entirely of Rachel Dolezal-style “transracial” students who wear blackface.

At what point did actual engineers begin to aspire to become social engineers, anyway?

Librarians ‘contend with the oppression within’ at diversity conference

Did anybody ever consider leaving every child behind? Considering where we keep taking them, they’d probably be better off.

Campus Reform wonders whether the lack of initiatives pushing boys into fields traditionally dominated by girls has anything to do with the fact that those fields aren’t known for their money-making capacities.

The sensitivity training also included a “Two Minutes Hate” during which staff members were shown a slideshow with gender-conforming and gender-neutral individuals. Passing marks were given to those who grimaced and glowered the most at anyone who didn’t look like what Steven Crowder would term “androgynous amoebas.”

Who wouldn’t? That’s a lot of money, to put in the God of Diversity’s collection plate. Even the devout tremble when they tithe substantially, after all.

That’s dumb. The doesn’t advocate for the killing of children as one of its core services, else it wouldn't give courses in firearm safety. Planned Parenthood, on the other hand...

The professor accuses both the left and the right of “constitutional extremism,” stating that the two sides aggressively defend the First and the Second Amendment, respectively. She may want to check the first part of that allegation.

Just think how many “gender reassignment” surgeries they could have paid for with that money!

The alternative, naturally, being that college students are gradually diversitied to death.

The union claims that private companies would provide fewer jobs and lower benefits, but also that the current union workers already know how to do their jobs “efficiently.”

One wonders whether they even noticed the contradiction there.

Why stop there? We would argue that free tuition is useless even with K-12 reform.

Campus Reform is still working to confirm rumors that he departed through his newly-constructed escape hatch.

Wouldn’t an ejection seat or a trebuchet been a better option, anyway?

Yes, you read that right and no, it’s not April Fool’s. A professor has said these words. Hopefully he won’t be “disappeared” by his colleagues.

But the fact that it’s “not necessary” is exactly what makes it so “desirable” to liberals!

Fun fact: an anagram for “Tarleton” is “tolerant.” Oh, we know. Nothing more than a fun fact.

She should speak for herself. And perhaps a significant portion of Seattle, as well, but that’s it.

‘Privilege Board’ gets prominent placement at App State

They took flak for this when the same board was found in a laundry room. What did they think was gonna happen when they left it up in the Student Union all summer? Adulation?

They’re basically on indefinite probation, so it will be interesting to see how they handle themselves this school year. If they throw stones at passing Jewish students, perhaps they’ll be placed on double secret probation.

Thankfully, this may mean that fewer Jewish girls are forced to cower behind sacks of potatoes to hide from braying mobs.

Cultural competence, inclusion, a black cultural center...what a scrumptious menu! Speaking of which, can we get a side order of some organically grown, free trade food justice, please?

That’s not what we heard. According to our sources on the Left, even just setting foot in North Carolina makes one complicit in the greatest hate crime since the Holocaust.

Something tells us this bias assessment response team (BART) would’ve made school a little less fun than the Simpsons variant.

Well, they won’t have diversity of thought, but the “Afro furturist [sic] conjure art” is liable to draw a wild and varied crowd.