Will Rierson North Carolina Campus Correspondent @RiersonNC on Sep 13, 2016 at 10:39 AM EDT 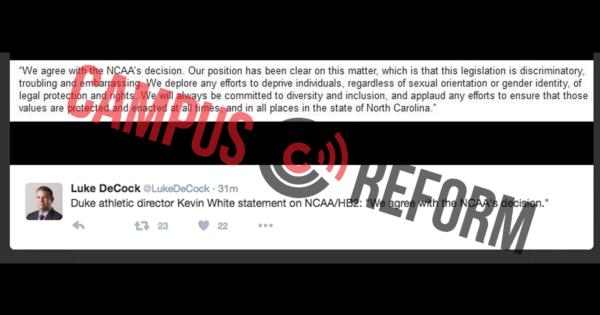 The National Collegiate Athletic Association announced Monday that it is cancelling all post-season championship games scheduled for play in North Carolina in response to the state’s controversial transgender bathroom law.

Seven championships or elimination-round games in Division I, II, and III sports have been removed from the state, including two rounds of Division I men’s basketball games—an extremely popular sporting event in North Carolina.

“This is so absurd it’s almost comical.”

The NCAA specified that “North Carolina has the only statewide law that makes it unlawful to use a restroom different from the gender on one’s birth certificate, regardless of gender identity.”

The law, known as HB2, and its legal ramifications are the basis for the NCAA’s decision. The NCAA also bans championships from states where the government displays the Confederate flag, and schools with “hostile and abusive Native American imagery.”

The NCAA Board of Governors said that “championships and events must promote an inclusive atmosphere for all college athletes, coaches, administrators, and fans.”

Duke University, which has already had opponents cancel commitments to play in a Duke-held tournament, swiftly responded with praise for the NCAA decision.

“We agree with the NCAA’s decision,” Duke athletic director Kevin White said. “Our position has been clear on this matter, which is that legislation is discriminatory, troubling, and embarrassing. We deplore any efforts to deprive individuals, regardless of sexual orientation or gender identity, of legal protections and rights.”

The athletic director at the University of North Carolina at Chapel Hill (UNC), the state’s flagship school, took a gentler tone in responding to the news, focusing on the lost opportunities for fans and athletes to hold tournament games in the state.

“Carolina Athletics is steadfast in its commitment to fairness, inclusion, and ensuring that all who come to our campus for athletics events are welcome,” Bubba Cunningham said in a statement. “We are disappointed for the people of this great state, the communities that are scheduled to play host to these championship events, and...the students who may be denied the opportunity to compete for championships in their home state.” 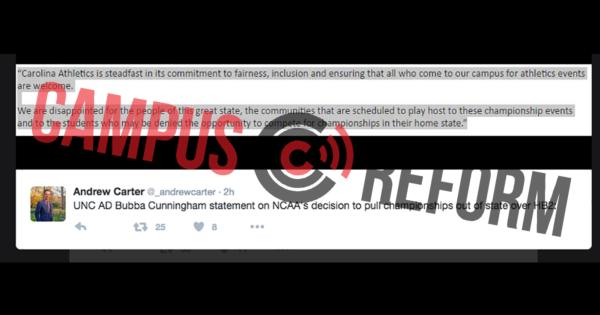 The NCAA described the change of venue differently, defending its withdrawal of tournament games from the state as a matter of respect.

“Fairness is about more than the opportunity to participate in college sports, or even compete for championships,” NCAA President Mark Emmert said. “We believe in providing a safe and respectful environment at our events and are committed to providing the best experience possible for college athletes, fans, and everyone taking part in our championships.”

Duke, the 2015 Division I men’s basketball national champion, and UNC, the 2016 runner-up, are perennial basketball powerhouses and one of them, or another North Carolina squad, could have appeared in a tournament round held in the state.

The president of the University of North Carolina system, Margaret Spellings, said she was “surprised and disappointed by the NCAA’s decision” and welcomed a “speedy resolution of these issues by the court,” The News & Observer reports.

A spokesperson for the North Carolina Republican Party also apparently waded into the news, brazenly denouncing the NCAA’s decision in a written statement shared on Twitter by local journalists. 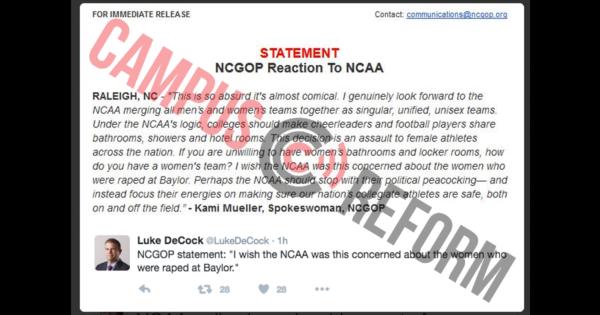 “This is so absurd it’s almost comical,” Kami Mueller asserts. “I genuinely look forward to the NCAA merging all men’s and women’s teams together as singular, unified, unisex teams.”

Mueller goes on to describe the decision as a contradiction of the basic assumptions underlying gender-based distinctions in collegiate athletics.

“Under the NCAA’s logic, colleges should make cheerleaders and football players share bathrooms, showers, and hotel rooms,” Mueller argues. “This decision is an assault to female athletes across the nation. If you are unwilling to have women’s bathrooms and locker rooms, how do you have a women’s team?”

Mueller saved her harshest criticism for the end of her statement, declaring, “I wish the NCAA was this concerned about the women who were raped at Baylor. Perhaps the NCAA should stop with the political peacocking—and instead focus their energies on making sure our nation’s collegiate athletes are safe, both on and off the field.”

At publishing time, no other statements had been made by prominent Republican leaders in North Carolina, though at least one Democratic state senator, Mike Woodard, called on legislators to repeal HB2 via Twitter following the NCAA’s announcement.